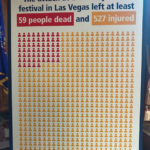 In the wake of the Las Vegas massacre, frustrated Democrats in the state Assembly and gun control advocates are calling for action on bills they say will help prevent gun violence.

At a Capitol press conference, Jerry Bonavia of WAVE — the Wisconsin Anti-Violence Effort, argued it’s time to talk about action on gun violence. “But we can’t have those conversations, because at least some of our elected officials won’t engage in those conversations, not in a real way,” Bonavia said.

Republican leaders in Washington are “not going to do a damned thing,” said Representative Terese Berceau. “We’re not allowed to talk about this public health crisis, this atrocity. We are not allowed to debate safety measures, because they are stymied in our state and national government.”

Berceau has authored a bill to require universal background checks for all weapons purchases in Wisconsin. That measure, along with a bill from Representative Chris Taylor requiring a 48 hour waiting period on handgun purchases, has never received a public hearing.

“Overwhelmingly the people of Wisconsin and across the United States believe in common sense gun safety measures,” said Representative Melissa Sargent of Madison. “That’s all we’re asking for today.”