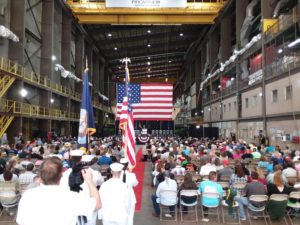 The U.S. Navy has awarded Lockheed Martin and Marinette Marine a contract of up to $584 million to construct LCS 27.

Marinette County Association for Business and Industry Executive Director Ann Hartnell notes that won’t be the only work Marinette Marine will be doing for the Navy.   “There are three ships in the process right now of construction and three sitting in the water for finishing touches and trials.”

LCS 27 is the 14th Freedom-variant ordered by the Navy to date. Hartnell says that program has roughly a 2.5% direct and indirect impact on the county’s economy. “Probably 500-700 people on the campus every day that are either the supply chain or are contractors hired by Marinette Marine to do tasks in the LCS program.”

Hartnell credits Marinette Marine and the LCS effort for what she says are positive jobless rate figures.

In an effort to ensure the program continues, Hartnell notes the county offers revolving loan funds to suppliers and contractors, and will soon launch another initiative. “We will have the grand opening in the next month for a business and industrial incubator that is dedicated to the growth and acceleration of the Maritime industry in Northeast Wisconsin.”

Hartnell says city officials are also engaged in an ongoing dialogue with Marinette Marine about potential problems and future contracts.

To date, Marinette Marine and project contractor Lockheed Martin have delivered five ships to the U.S. Navy.  Seven ships are in various stages of construction, with two more in long-lead production.