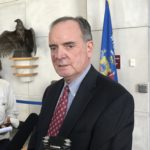 Don’t look for work on the Foxconn contract to be completed before next month. Wisconsin Economic Development Corporation Executive Officer Mark Hogan spoke to reporters, after the WEDC Board of Directors received an update on the $3 billion package of tax incentives being used to lure the Taiwanese flat panel maker to Racine County.

“It’s very complex,” Hogan said. “The company has its shareholders, its investors, we have our taxpayers.”

A memorandum of understanding between the two parties bore a date of September 30th. “I think it was goal. I think we accomplished a lot by that September 30th date. We got that legislation done,” said Hogan. “It’s never a problem to have a target, but it was never a line in the sand.

Any contract between the state and Foxconn will require the approval of the WEDC board before any work begins on a factory in Racine County, which the administration of Governor Scott Walker has said could provide up to 13,000 jobs. Hogan said the WEDC board’s next meeting on November 8th is the earliest date on which a contract might be approved.

“Prior to that point we’ll continue to process the information, and underwrite the transaction,” Hogan said.