You are here: Home / News / Ryan ‘bullish’ about chances of passing tax reforms 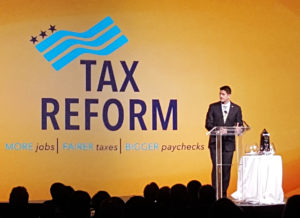 House Speaker Paul Ryan is optimistic about the chances of getting a tax reform package through Congress.

Ryan was in Madison Monday morning at a Wisconsin Manufacturers and Commerce event, where he discussed efforts to pass a tax reform plan. The Janesville Republican said he expects the tax overhaul plan to fare better than repeated attempts to repeal the Affordable Care Act, where a narrow Republican majority in the Senate has so far stopped multiple proposals from passing the chamber.

“The reason I’m much much more bullish on tax reform through the Senate, is because we more or less agree on this,” Ryan said. “We spent four months negotiating with the Senate and the White House what tax reform will look like at the front end of the situation…so that we can nail the landing at the end of the year.”

Ryan said he feels they are “better wired” for success and he’s hopeful Congress will be able pass tax reforms before the end of the year.