You are here: Home / Health / Medicine / Ryan says propping up Obamacare not the answer 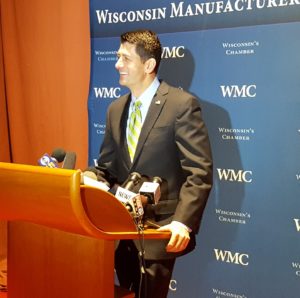 House Speaker Paul Ryan is backing the president’s decision to cut subsidies. provided under the Affordable Care Act to help many Americans afford health insurance through the federal exchanges.

During an appearance in Madison Monday, the Janesville Republican said the president was right to take that action because the subsidies were unconstitutional, since they rely on funding Congress did not authorize. “The Congress decides whether spending occurs or not…and President Obama exceeded his powers by spending money that was never authorized by Congress in the form of these insurance subsidies.”

Ryan said the ACA, also known as Obamacare, has failed, and the focus needs to be on fixing the health care system. “The answer is not to just shovel more money at a failing program that’s doubling premiums and causing monopolies…the answer is to reform the underlining failure of the law, and one of those underlying failures is the lack of choice and competition,” Ryan argued.

Republicans have so far been unable to reach an agreement on how to repeal and replace the health care law.

Ryan said he still sees a path though in a bill recently proposed the Senate – the Graham-Cassidy health care bill. “Giving state’s the right to set up their own health insurance markets…financing risk pools to make sure we cover people with pre-existing conditions. That’s the secret to the answer, which is to bring down premiums for everybody while protecting people who have catastrophic illnesses.”

The Graham-Cassidy bill fell short of getting the majority support needed to receive a vote.