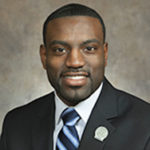 The Walker campaign did not respond to a request for comment, but the Democratic Party of Wisconsin did. “I definitely think that this is Governor Walker’s campaign stunt,” said state Representative David Bowen, a Milwaukee lawmaker who serves as the DPW’s first vice-chair.

“The governor is shamefully engaging in this divisive race-baiting tactic, on the same day that a report was released that shows Wisconsin ranks among the worst states for African-American youth,” Bowen said.

Walker initially stayed out of the controversy, saying in September that he wasn’t going to tell others what they should or shouldn’t do during the anthem. But he changed course last week, urging NFL owners to encourage players to stand, and shift their focus to victims of domestic violence.

Bowen said the governor “should really realign his efforts to show real leadership, and to actually stand for peoples’ constitutional right.”

Walker has yet to officially announce his reelection campaign, but is scheduled to do so on November 5th.