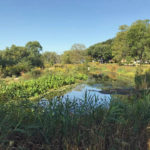 Republicans in the Wisconsin Legislature want to eliminate state protections for wetlands that aren’t mandated by the federal government. State Representative Jim Steineke (R-Kaukauna) is co-sponsor of a bill that would bring state regulations into line with federal rules regulating wetlands.

“We’re trying to create and protect high quality wetlands in the state, while allowing development to happen in a way that’s more efficient for homeowners and developers throughout the state,” Steineke said, adding that Wisconsin standards will still be among the most stringent in the nation.

Erin O’Brien, policy programs director with the Wisconsin Wetlands Association, said the bill would negatively impact isolated wetlands. “Developers have no burden whatsoever to try to design their projects to avoid and minimize those wetlands,” O’Brien said. “What this bill does is replace a protective permit system with a new program that essentially allows a developer to write a check, in order to pave or fill in these wetlands.”

“I think this puts us in a good position, where we’re being responsive to homeowners developers, but we’re also making sure we’re adding protections for wetlands,” said Steineke. A separate bill would eliminate state air quality standards that aren’t mandated by the federal government.