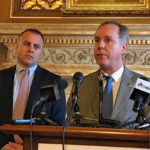 Leaders in the state Assembly brought staff together on Tuesday morning, for a refresher on the chamber’s sexual harassment policies. “We have always had a strong policy, making sure that we are a zero tolerance (workplace),” said Speaker Robin Vos.

“We do not accept any form of harassment in the workplace. We try to be as proactive as we can be. Luckily, we had predecessors who had the policies in place.”

Those policies were in place in 2014, when Majority Leader Bill Kramer was convicted on charges that he sexually assaulted a legislative aide. Kramer was sentenced to five months in jail. Despite open records requests by Madison and Milwaukee newspapers, the results of the internal investigation in Kramer’s case have not been made public.

Vos and Minority Leader Gordon Hintz said they would continue to oppose the release of records of internal investigations, even if names are redacted.

“Some of the victims may not want those details out there, and I think our policy first has been to protect those who could be most impacted by the release of that information, especially in cases where I think a lot of the information is out there,” Hintz said.

“We are trying to treat the workplace as it would be with any private sector employer,” Vos said. “When there’s a personell issue the personell files have a right to remain private.”