You are here: Home / Sports / Bucks tighten up on defense, defeat Grizzlies (AUDIO) 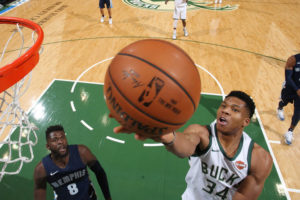 After the Memphis Grizzlies put up 65 first half points, the Milwaukee Bucks (7-6) tightened up their defense in the second half and pulled out a 110-103 victory on Monday night at the BMO Harris Bradley Center.

The Grizzlies scored 36-points in the second quarter and took a 65-60 lead into the locker room at halftime.

“In the first half it was a shoot around like this morning where we were just going through the motions and both teams were just going to play buddy ball and score,” Bucks coach Jason Kidd said.

The Bucks tightened things up in the third quarter and Memphis made just 5 of 18 field goals and turned a five point halftime deficit into a seven point lead after three quarters.

In the fourth quarter, Memphis got hot again.  Tyreke Evans scored 12 of his 27 points to put the Grizzlies back in front.  But Kidd called a timeout and came back with his starters, who responded by going on a 11-2 run and taking the lead again for good.

Giannis Antetokounmpo had 27 points to lead the Bucks.  John Henson and Khris Middleton added 17 each.  Henson’s play down the stretch was big on both ends, helping the Bucks with some key baskets to help preserve the lead.

AUDIO: Jason Kidd on his teams defensive improvement in 2nd half :17