You are here: Home / Badgers / Davison named Big Ten co-freshman of the Week 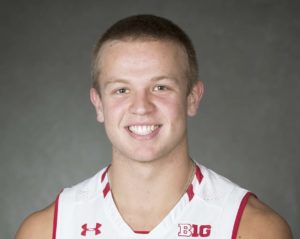 Wisconsin Badger guard Brad Davison, who averaged 15 points and two steals per game last week, was named the Big Ten’s Co-Freshman of the Week by the league on Monday.

The Maple Grove, Minnesota native came off the bench and provided a big spark against No. 22 Baylor, tallying 12 points, four steals, one assist and one rebound.  Davison then made his first career start against No. 23 UCLA, finishing with 14 points, two rebounds and two steals.  Against Milwaukee, Davison went 7 of 8 from the field, including 5 of 6 from three point range and had career-highs in points (19), field goals (7) and 3’s (5).

Davison ranks second on the team and third among Big Ten freshmen averaging 11.8 points a game.  He also ranks second in the Big Ten with 2.3 steals per game.

Davison and the Badgers face No. 18 Virginia on the road Monday night as part of the Big Ten/ACC Challenge.  Tip time is set for 8 p.m. (CT) on ESPN2.  The Badgers then return home to open Big Ten play on Saturday against Ohio State with a 4 p.m. contest on FOX.