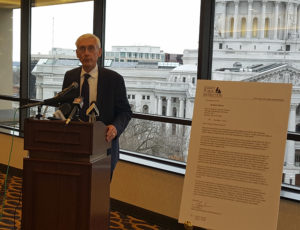 State Superintendent of Public Instruction Tony Evers does not want the Department of Justice representing him a lawsuit challenging the powers of his office.

The governor ordered the attorney general to represent Evers’ agency in a lawsuit filed by the conservative Wisconsin Institute for Law and Liberty – which is challenging the superintendent’s ability to write agency rules. A state law passed earlier this year requires the Department of Administration and governor to approve rules adopted by state agencies, although the state Supreme Court previously found the DPI superintendent has the constitutional authority to write rules without that type of oversight.

Speaking to reporters Tuesday, Evers said DOJ is not able to effectively represent his agency because Republican Attorney General Brad Schimel and Governor Scott Walker support the position of WILL. “Don’t be fooled by this,” Evers said. “This is not just an issue about administrative rules…it’s about getting and gutting the state superintendent’s position.”

Evers sent a letter to the attorney general Tuesday saying he was firing the agency. “You’re fired for abusing your power in order to force your right wing agenda on our public schools. You’re fired because, in a Democracy, the governor doesn’t get to choose his opponents on the ballot and his opponent’s lawyers in court.”

Evers is a Democratic candidate for governor running to take on Scott Walker next year. He said Tuesday he would like a DPI attorney to represent the agency in the case, as was the case during a previous lawsuit that the court ruled on last year.

Schimel responded to Evers’ comments on social media, posting that DOJ has the authority to represent the state in the case and will continue to do so.

The attorney general has the authority to represent the state in this lawsuit and will be doing so. @WISuptTonyEvers does not have the ability to “fire” @WisDOJ. https://t.co/c7oCNIMoFc

A spokesman for the agency also noted that “whether Superintendent Evers likes it or not, the State of Wisconsin is the actual defendant in this lawsuit, and his personal opinions as to the what the law is or should be will have no bearing on the Attorney General’s power or ethical duty to represent the State. The citizens of this state expect elected officials to carry out the laws passed by the Legislature, not resist them.”

A spokesman for Governor Walker argued the case is about following the law, not politics. “DPI should be held to the same high level of transparency and accountability taxpayers expect of any other state agency. DPI should welcome greater accountability, not dodge it,” says spokesman Tom Evenson.

The state Supreme Court has not yet responded to WILL’s request to consider its lawsuit.