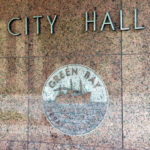 Green Bay Mayor Jim Schmitt says he will not seek another term in office. Schmitt made the announcement official at Tuesday afternoon’s Boards and Commissioners Appreciation Reception at City Hall.

Schmitt says there was no one factor that led to the decision, including accusationsthat he inappropriately managed finances in connection with the Hotel Northlandproject.

“That didn’t effect me at all.  The next election, there would be another issue.  I’m not sure what it is yet, but that’s just politics.”

While Schmitt says he’s unsure what’s next, he notes “I’m not going to run for anything.  That’s the last you saw of me on the ballot.”

Schmitt is asked if he has anyone he would like to see succeed him.  “The person inside has to really, really want to lead the city and love the city.  I don’t have anyone specificially in mind.  I think there are quite a few people out there who could do it.”

The Mayor’s current term ends in April of 2019, and he has been Mayor since 2003. Schmitt says there are a few things he’d like to see happen before he leaves office.

After being convicted of violating Campaign Finance Reporting Laws, Schmitt survived an attempt to remove him from office earlier this year.