You are here: Home / Sports / Kimberly keeps on keeping on! 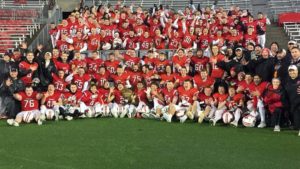 The 2017 WIAA State High School Football Championships are in the books and the Kimberly Papermakers are champions once again.

Kimberly (14-0) won its fifth straight State Championship (the last four in Division 1), extending the nation’s longest win streak to 70 games with a 27-7 win over Sun Prairie in the D-1 title game.

Sun Prairie (13-1) scored first, just two plays after recovering a first quarter fumble.  Jack Zander hit Cooper Nelson on a 19-yard scoring strike and the Cardinals jumped out to a 7-0 lead.  That would be the only score the Cardinals would get, despite owning the field position game for the entire first half.

Kimberly tied the game just before halftime on a 25-yard run by John Nett.  The Papermakers than took the lead for good on the first drive of the 3rd quarter when quarterback Alec Rosner sprinted 50 yards to put Kimberly in front 14-7.

State Player of the Year, D.J. Stewart, who rushed for 189 yards and two touchdowns put Kimberly on top 21-7 with a 25-yard touchdown run.

Draven Peeples had 127 yards for the Cardinals on the ground but appeared to be limping late in the first half and for the rest of the game.

Kimberly has now tied for the most State titles with seven.  The last time the Papermakers lost was in the 2012 Level 3 playoffs.

The Warriors’ Javian Dayne scored a pair of rushing touchdowns in the second half to help overcome a 13-0 deficit.

Brookfield Central (13-1) got 174 yards rushing from Zack Heckman.  Quarterback Drew Leszczynski completed 9 of 23 for 98 yards.  He also rushed for 50 yards and a touchdown.

The Warriors’ six State titles in their nine appearances in the final ranks second among all schools.

Rice Lake rushed for 325 yards as a team.  It’s the first State title for the Warriors since last winning it back in 1979.