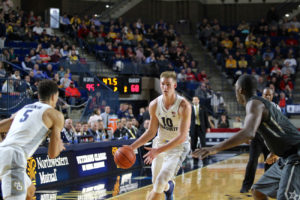 Sam Hauser poured in a collegiate best 30 points to help Marquette pull out a 86-83 win over Eastern Illinois in overtime on Monday night.

Hauser hit a pair of free throws with nine seconds left in regulation to tie the game 68-68.  Eastern Illinois’ Terrell Lewis had a shot at the buzzer but his long three was short.

The Golden Eagles jumped out quickly in overtime and held off the Panthers the rest of the way.

Marquette was dealing without Haanif Cheatham, who left the program for personal reasons.  Sacar Anim started in his place and finished with nine points and seven rebounds in 29 minutes.

Freshmen players Jamal Cain and Greg Elliott are expected to get more minutes with Cheatham gone.  They combined for 12 points in the win on Monday night.  Elliott also collected four steals and four blocked shots in the win.