You are here: Home / Sports / Marquette opens Maui Invitational with win over VCU 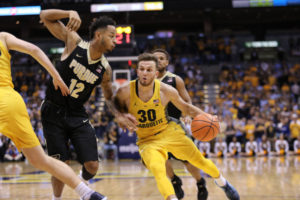 The Marquette Golden Eagles won their opening game in the Maui Jim Invitational on Monday, knocking off VCU 94-83.

The Golden Eagles (2-1) got 22 points from Markus Howard and 20 points each from Senior guard Andrew Rowsey and sophomore forward Sam Hauser.  Hauser scored 17 of his 20 points in the second half.  He also led the Golden Eagles in rebounds with nine.

Both teams were careless early, combining to commit 21 turnovers (Marquette-10 / VCU-11).  But the Golden Eagles held their turnover total to seven in the second half.