You are here: Home / Packers / Packers hoping Clark won’t be out long 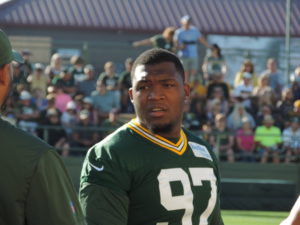 Nose tackle Kenny Clark’s second season with the Green Bay Packers has been rock solid.  When he left the field Sunday on a cart, the Packers were hoping they didn’t lose him for a significant portion of time.

Clark had his right leg and ankle trapped beneath another player when Baltimore’s Ryan Jenson was shoving Clark to the ground.  After the game against the Ravens, safety Ha Ha Clinton-Dix voiced his concerns about Jensen’s actions, calling it a “dirty play.”

Coach Mike McCarthy on Monday called the injury “unnecessary” during his news conference.

“The play that Kenny Clark was injured on, I think clearly Kenny is in a compromised position,” McCarthy said.  “Obviously you’ve got a physical game going on there on the interior.  I thought it was unnecessary, definitely an injury that could have potentially been avoided.”

McCarthy didn’t offer any injury updates on Clark, linebacker Clay Matthews or offensive lineman Justin McCray.  All three failed to finish Sunday’s game.  However, the NFL Network reported X rays on Clark’s ankle came back negative.  It’s believed that Clark suffered a high ankle sprain, but it’s not certain just how much time, if any, he will miss.

Clark has 32 tackles through 10 games, three tackles for loss, one quarterback hit, one pass defensed and one forced fumble.

The Packers face the Pittsburgh Steelers on Sunday night in Pittsburgh.

The Packers will practice on Thanksgiving day, but they’ll start early (8:30 a.m.) with the hopes of having the player’s home to celebrate the holiday by noon.