You are here: Home / Health / Medicine / Proposal would give women 12-month access to birth control 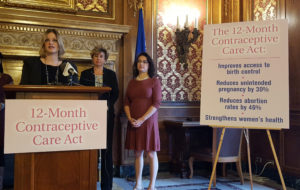 Women who take certain birth control medications could have a full year supply with one trip to the pharmacy, under legislation being offered by a Democratic lawmaker.

The bill from state Representative Katrina Shankland (D-Stevens Point) would allow women to get a 12 month prescription filled at the same time, as long as they had already been on the same medication for three months and it would not expire in that one-year period. The measure would allow women to avoid going back to the pharmacy monthly for many pill and patch birth control methods.

Shankland says the change is needed to help women consistently access birth control medications, which often need to be taken on a regular schedule but are limited to a maximum of a three month supply right now. She says those restrictions can make it difficult for women who work multiple jobs, have limited transportation, or live in rural areas to regularly access their prescription. “There is no medical reason why a woman must only receive a monthly supply of her birth control,” she argues.

Shankland introduced a version of the bill previously, but it failed to see much movement in the Republican-controlled legislature.