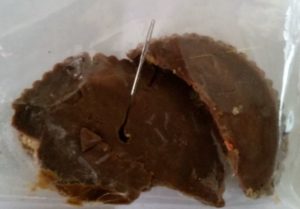 Add Green Bay to the list of cities where police say something potentially harmful was found inside a piece of Halloween candy.

Green Bay Police Captain Kevin Warych says an 8-year-old girl was about to eat the candy, when the needle was noticed. “The child was going to eat the candy, and in the process, the child noticed that there was a needle in it and quickly turned it over to her grandmother.”

Her grandmother then notified police.

Green Bay is just one of several communities where parents reported issues with Halloween candy. Neenah Police say a child found nails in three KIT KAT bars, while the Menominee Indian Reservation reported a child found a bag of meth inside their candy stash. Sewing needles were also found in candy given to a child in Arcadia earlier this week.

Warych says these are difficult situations to follow up on, but they are urging parents to check their kids candy carefully and report any issues.