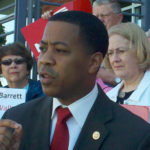 The head of the state firefighters’ union is the latest Democrat to run against Governor Scott Walker next fall. Mahlon Mitchell of Fitchburg announced his bid Monday morning, telling the Wisconsin State Journal it’s “time for a change” after eight years of the Republican Walker.

Mitchell, president of the Professional Fire Fighters of Wisconsin, ran for lieutenant governor in the 2012 recall elections, when he lost to Republican Rebecca Kleefisch.