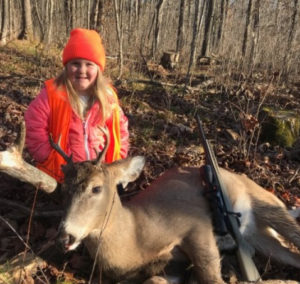 A six year old girl from north central Wisconsin killed a deer while hunting with her dad during opening weekend, taking advantage of a change in state law that lifts state age restrictions on mentorship programs.

The Wisconsin DNR posted a pic of Lexie Harris, with the six-point buck she shot on Sunday, to Twitter. The kindergartner pulled the trigger on her youth rifle from a hunting stand in Taylor County.

Her dad, Tyler Harris, said Lexie has gone hunting with him since she was three. It wasn’t until earlier this month that she could legally shoot a deer though, after Governor Scott Walker, on November 12th, signed a bill into law that eliminates the state’s minimum hunting age.