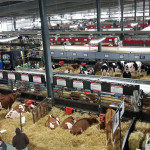 A high profile project in Madison will have to advance without state funding. In March, Governor Tony Evers announced $30-million in his proposed capital budget, towards redevelopment at Dane County’s Alliant Energy Center. It’s the main facility for the World Dairy Expo each year.

But this week Republicans on the legislature’s budget panel eliminated that money. A disappointed Dane County Executive Joe Parisi said: “The state has always recognized the importance of the Alliant Energy Center to the entire state, and particularly to our ag community.”

Among the $600 million requested by Governor Tony Evers that Republicans cut from state building budgets this week — included the redevelopment funds for the center.

The county had planned to raise an additional $47-million for improvements at Alliant. Parisi said that will be difficult absent the state funding.