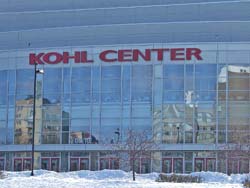 The last time the Wisconsin women’s hockey team played at the Kohl Center, they drew 15,359 fans in a 2-0 win over St. Cloud State in 2017.  That turned out to be the largest crowd to watch an NCAA women’s hockey game.

The Badgers will try to equal that record performance when they host the Ohio State Buckeyes on Sunday, Feb. 16 (2pm) at the Kohl Center.

It’s the final game of the 2019-20 regular season and it’ll be the sixth Fill the Bowl game as the Badgers raise money for local charity.

The Badgers made the Kohl Center their home from 1999 until they moved into LaBahn Arena in 2012.

No beneficiary has yet been announced.  Tickets for the game are expected to go on sale in October.