You are here: Home / Packers / McCarthy expected to take over as head coach of the Cowboys 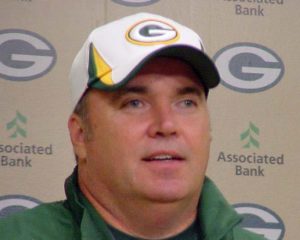 Former Green Bay Packers head coach Mike McCarthy is expected to become the next head coach of the Dallas Cowboys.  The news was first reported by Fox Sports and later by ESPN.

According to reports, McCarthy stayed at the home of Cowboys owner/general manager Jerry Jones on Saturday night.

McCarthy takes over Jason Garrett, who wasn’t retained after going 85-67 as the Cowboys head coach from 2010 to 2019.

McCarthy compiled a 125-77-2 record with the Packers and made the playoffs in nine of his 13 seasons.  He led the Packers to a Super Bowl XLV win and two additional NFC Championship games.

Before interviewing with the Cowboys over the weekend, McCarthy interviewed with Carolina, Cleveland and the New York Giants.

The Cowboys also interviewed Marvin Lewis before deciding McCarthy was their man.

While coaching the Packers, McCarthy had a 7-3 record against the Dallas, twice ending the Cowboys season in the divisional playoffs in the 2014 and 2016 playoffs.