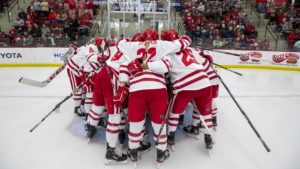 A crowd of 14,361 at the Kohl Center on Sunday saw the 2nd ranked Badger women’s hockey team skate to a 1-1 tie with 6th ranked Ohio State in regulation before the Badgers earned a 2-1 win in a 3-on-3 overtime.

Wisconsin (26-4-2, 16-4-2-1 WCHA) picked up a critical point in the league standings as Britta Curl scored the game winner in overtime.

The Buckeyes (18-9-5, 11-7-4-2 WCHA) scored the first goal three minutes into the game.  The Badgers wouldn’t tie it until Abby Roque went top shelf over Ohio State goaltender Andrea Braendii with 9:14 left in the third period.

Curl’s game winner was assisted by juniors Daryl Watts and Natalie Buchbinder to give the Badgers their first WCHA extra point of the season.