You are here: Home / Brewers / Brewers get first win at Miller Park this season (AUDIO) 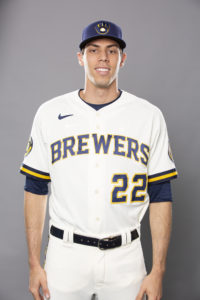 The Milwaukee Brewers finally earned their first win at Miller Park this season.

The Brewers scored six runs in the sixth inning on the way to a 9-3 win over the Cincinnati, salvaging the final game of their three game series with the Reds.

Justin Smoak started the rally with a lead-off double and later came around to drive in two runs with a single.  The two hits by Smoak in the inning also came from both sides of the plate.  Smoak started the game with a .128 batting average, 19 strikeouts in 43 at bats but added three hits in all.

Smoak wasn’t the only slumping Brewers hitter to break out on Sunday.  Christian Yelich, mired in a early season slump, had a triple, a  home run and a pair of walks.

Keston Hiura also homered among his three hits as the Brewers finally had the kind of day they had been waiting all season for.

The Brewers open a three-game series against the Minnesota Twins at Miller Park on Monday night.  Adrian Houser gets the start for the Brewers.

AUDIO: Craig Counsell on the Brewers good day at the plate :17

AUDIO: Craig counsell says you feel like the big number is always coming :15

AUDIO: Justin Smoak on the Brewers 1st win at Miller Park this year :10

AUDIO: Christian Yelich says things can turn quickly in a season like this :23