You are here: Home / News / Milwaukee leaders on the DNC – and Trump’s visit to Wisconsin 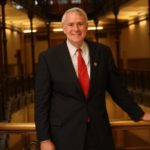 “It’s not going to be the four day extravaganza . . . and we were looking forward to that,” Barrett told the CBS Evening News. “There’s no way we’re going to sugar coat that. That was really something we were excited about.”

With constraints in place due to coronavirus, only a handful of participants will actually be in downtown Milwaukee’s Wisconsin Center this week.

Along with the reduced number of participants, the DNC will likely see relatively little protest activity, compared to what was originally expected.

“This is largely a virtual event,” said Milwaukee County Executive David Crowley. “But there is no doubt in my mind that the sheriff’s office as well as the Milwaukee Police Department are going to everything they can, to not only make sure that we have a safe DNC, but also making sure that those who are exercising their 1st Amendment rights can do so safely as well.”

President Donald Trump hopes to upstage his opponents on Monday, with a campaign stop in Oshkosh.

“It is a media stunt,” said Crowley. “This is showing that he’s willing to come here, and I think this is all that this is about. This is a distraction about what is going to be happening here with the city of Milwaukee and Milwaukee County.”

Virtual or not, Barrett said the DNC will serve as a contrast to President Trump’s handling – some would say mishandling – of the global coronavirus pandemic.

“You’re going to see the Democratic theme of ‘we’ve got to take this seriously.’ And on the Republican side, you’ve got obviously a president who wants to talk about everything else,” the mayor said. “Joe Biden has never made fun of masks. He’s never belittled health care experts, and he’s never called it a hoax.”

And Crowley said Milwaukee still hopes the DNC will serve as a platform to tout efforts by the city and the county to address issues of racial equity, health disparities and gun violence, which has been declared a public health crisis.