You are here: Home / Packers / Packers among those affected by COVID testing issues 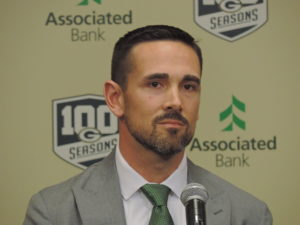 The Green Bay Packers were one of 11 teams that had players test positive for COVID-19 after hearing from results out of a lab in New Jersey.  But the Packers administered Rapid Tests to those affected and they came back negative Sunday, allowing the team to practice.

“That definitely came into play for us (Sunday) morning, and you know, we only had a couple guys that was affecting, so we felt like we could still go out there and run practice,” said coach Matt LaFleur.  “But it certainly crossed our mind.

“And the other thing is, we never want to put our guys at risk.  One practice isn’t worth it if we really, truly felt like this was a serious problem within our football team in terms of a bunch of guys testing positive.  So, you know, if we ever got into that situation where we thought it was a real thing, definitely cancel the practice.”

Both the Chicago Bears and Cleveland Browns postponed their practices on Sunday while Minnesota and Buffalo held players out of their workouts.

The New York Jets and Pittsburgh Steelers were also impacted.  The Jets had 10 positive tests while the Bears had nine.

The NFL issued a statement on the testing on Sunday:

Saturday’s daily COVID testing returned several positive tests from each of the clubs serviced by the same laboratory in New Jersey.  We are working with our testing partner, BioReference, to investigate these results, while the clubs work to confirm or rule out the positive tests.  Clubs are taking immediate precautionary measures as outlined in the NFL-NFLPA’s health and safety protocols to include contact tracing, isolation of individuals and temporarily adjusting the schedule, where appropriate.  The other laboratories used for NFL testing have not had similar results.

With regards to the Packers response to the lab issues, LaFleur said, “Just circumstances around it with it affecting 10 other teams or 11 other teams or whatever it was, we felt that it was a pretty strong case that may have been the issue.”