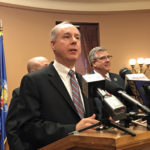 But in statements released Tuesday, neither Senate Majority Leader Scott Fitzgerald or Assembly Speaker Robin Vos signaled any intention of calling legislators back to Madison to rescind Evers’ order.

Both men referred to Evers’ action as illegal, but said legal, rather than legislative remedies should be pursued.

Fitzgerald said it’s “almost assuredly headed for litigation.” Vos said “there is already a court challenge and undoubtedly, there will be more.”

A number of Republicans, including state Senators Duey Stroebel, Chris Kapenga and Steve Nass, and Representatives Barbara Dittrich and Cindi Duchow are calling for the leaders to call them back, to vote on overturning the extension, which is to remain in effect for 60 days.