You are here: Home / News / Trump set to rally his base in Mosinee 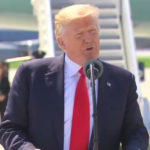 As many as 15,000 people are expected to attend President Donald Trump’s campaign rally in Mosinee.

The Trump Campaign said hand sanitizer and masks will be available at Central Wisconsin Airport. The Marathon County Health Department urges social distancing, mask wearing and frequent hand washing. Both the campaign and the health department encourage people who are sick to stay home.

President Trump, who’s rarely seen wearing a mask, is expected to start his speech at 8 p.m.

Republican U.S. Senator Ron Johnson will not be traveling with Trump. His office says Johnson had been exposed on Monday to someone who tested positive for COVID-19.

According to a statement, Johnson tested negative for the virus on Wednesday and is not experiencing symptoms, but will remain in quarantine until September 29.