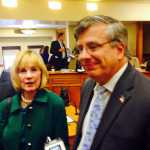 One of the state’s most powerful Republican legislators is stepping down. State Representative John Nygren (R-Marinette) announced on Tuesday that he’s resigning to pursue a job in the private sector. That’s effective Wednesday.

Nygren was the Assembly co-chair of the budget writing Joint Finance Committee, and has represented the 89th Assembly District in northeastern Wisconsin served in the Assembly since 2006. He was reelected to another term in November. Govenor Tony Evers will call a special election to fill the vacant seat.

Nygren was critical in implementing changes which made the JFC a lynchpin in how the Legislature controls the flow of money through state agencies.