You are here: Home / News / Madison police stepping up their presence in response to security concerns 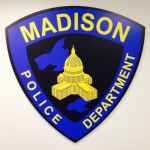 Madison area law enforcement agencies are increasing their presence through next Wednesday, although they’ve not heard of any specific threats.

“Because of the larger national intelligence picture, and out of an abundance of caution, we will continue to maintain an advanced staffing posture through Inauguration Day, and certainly we will reevaluate as things go,” interim Police Chief Vic Wahl said Thursday.

“We would much rather have to investigate things that turn out to be harmless than not be aware of something that is of concern.”

MPD says as of now there are no known threats to Madison ahead of two known events on Sunday, but want people to stay aware. https://t.co/IqF3RuZJsz

“And so a few of the outcomes for that will certainly be an enhanced MPD staffing posture over the next week, that includes additional MPD personnel and additional specialized MPD personnel in the event that they’re needed.”

In addition, a Wisconsin National Guard unit has been activated to assist state Capitol police in securing the Capitol and other government buildings. Similar precautions are in place in state capitol cities across the nation in response to security concerns.

Wahl said one protest is scheduled for downtown Madison midday on Sunday, and that the public should avoid the area due to the potential for street closures and traffic issues.  This event isn’t tied to the inauguration — it’s a demonstration in the Jacob Blake case as prosecutors have declined charges against an officer that shot Blake last summer.

Dane County Sheriff Dave Mahoney released a statement which read in part: “Our deputies and police officers will always protect your right to assemble and to air grievances, but only in a peaceful manner. The time is now for our Nation to gather in unity and peace.”

In addition, the statewide sheriffs association called for calm ahead of potential unrest on Inauguration Day.

“Please remember that we, as law enforcement have a sworn duty to enforce the law, said Grant County Sheriff Nate Dreckman, President of the Badger State Sheriff’s Association. “If you step outside the law, there will be consequences.”