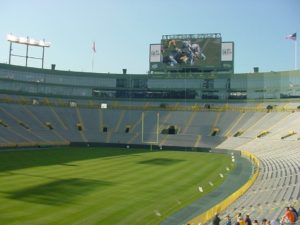 After a relatively easy schedule this season, the Green Bay Packers are expected to face a stiffer challenge in 2021.  Next seasons schedule could see the Packers playing as many as 10 games against teams in this year’s playoffs.

The completion of the regular season on Sunday gives the Packers the majority of their opponents for 2021.

In addition to games against teams in the NFC North (Chicago, Detroit and Minnesota), the Packers will play home games against Cleveland, Pittsburgh, Seattle, the Los Angeles Rams and The Washington Football Team.

On the road next season, the Packers will face their division rivals, plus the Cincinnati Bengals, Baltimore Ravens, San Francisco 49ers, Arizona Cardinals and New Orleans Saints.

The NFL is expected to add a 17th game to the schedule as well.  That opponent will be an interconference game based on divisional standings from the previous season.  It means the Packers could face any one of the AFC Divisional Champions, Buffalo, Kansas City or Tennessee.  That would make 10, the number of teams in this years playoffs that the Packers could be facing next season.