You are here: Home / News / Pocan rules out run for U.S. Senate 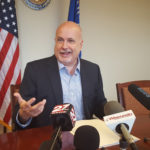 Congressman Mark Pocan won’t run for the U-S Senate in the 2022 election. The 2nd District Democrat would be seeking to replace Republican Ron Johnson – who hasn’t formally made any announcement about his future, but has said in the past that he didn’t plan to run for re-election.

Pocan said Monday that he would be less effective if he gave up his seniority in the House to move to the Senate.  He’s currently a member of the powerful House Appropriations Committee and Pocan said his seniority means he can deliver results there.

Pocan has served his district in south central Wisconsin since 2013 following 14 years in the Wisconsin State Assembly.