You are here: Home / News / Vos asks Evers to order flags at half-staff for Rush Limbaugh 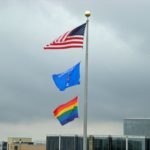 The conservative radio host, who died of lung cancer on Wednesday, was a Missouri native and Florida resident with no connection to Wisconsin.

But in a letter to Governor Tony Evers requesting that Wisconsin and U.S. flags be flown at half staff Vos said “there is no question that he made a lasting impact on political discourse and conservativism in our nation.”

Some people quickly pointed out that no such request was made to similarly honor Hank Aaron when the legendary Major Leaguer, who had close ties to Wisconsin, died last month.