You are here: Home / Archives for bhague@wrn.com

A dispute between Speaker Robin Vos and a paralyzed Assembly Democrat remains unresolved. Vos sent a letter to Representative Jimmy Anderson on Thursday, in which he noted accommodations that have been made for Anderson, who uses a wheelchair, and said a videographer could be made available for committee meetings that Anderson may be unable to attend.

But Vos said he would not allow Anderson to phone in to committee meetings, and accused him of “political grandstanding.” Vos said Anderson had yet to make a formal request for the phone accommodation.

Anderson, in a series of tweets, called Vos’ accusation “offensive.” He said the Speaker has been aware of his accommodation requests since January and has ignored them.

Former House Speaker Paul Ryan has a new job. He will be a professor and guest lecturer in political science and economics at the University of Notre Dame. Ryan will assume that position this fall.

The former Wisconsin congressman and current Janesville resident is expected to guest-lecture on the fundamentals of American government, the current state of political polarization, and Catholicism and economics.

An increase in the state gasoline tax just can’t gain any traction, according to Marquette Law School Poll director Charles Franklin. “People still don’t want to raise the gas tax,” Franklin said Wednesday. The percentage of poll respondents who favor keeping the state tax on gas where it is has actually increased since the last poll in January, to 57 percent. Governor Tony Evers has proposed an increase of nearly 9 cents a gallon to fund state roads and highways.

Evers’ spokeswoman Melissa Baldauff issued a statement in response to the poll results. “The latest Marquette Law poll confirms what we already know — the governor has been listening to Wisconsinites and has proposed a budget that reflects the will of the people. We’re ready to work together to pass The People’s Budget so we can expand Medicaid, legalize medical marijuana, invest in K-12 education, improve water quality and public safety, and address our infrastructure needs. These aren’t Democratic values or Republican values, they are Wisconsin values, and a majority of Wisconsinites agree.”

Brian Hagedorn says a recount in the race for Wisconsin Supreme Court would be a waste of time. Hagedorn tells WISN’s Jay Weber this morning that his lead in the race is durable. “The initial canvasses that have come in have us picking up additional votes. We are over 6,000 at this point.

The state Court of Appeals judge says he spoke with Chief Judge Lisa Neubauer over the weekend. “They’re waiting for the canvassing to be completed, and that she would make a decision about what she wants to do after that.” If Neubauer asks for a recount, she’d need to make that decision by Monday.

U.S. Senator Ron Johnson says there really is a crisis on the border with Mexico, and it’s largely a result of “loopholes” in U.S. immigration law. “I’m hoping to, in a bipartisan basis, start fixing these loopholes that incentivizes unaccompanied children, incentivizes families coming to this country,” the Wisconsin Republican said Sunday on WKOW’s Capitol City Sunday. “Once they’re here, they get to stay.”

“As our hearing last week clearly demonstrated, we have a crisis at our southwest border. We need steady, informed and effective leadership in the administration and in Congress to have any hope of fixing our out of control border security and immigration problems.”

“I’m excited to see this project move forward, and I know it will add value to the entire state of Wisconsin,” Evers said.

The Alliant complex attracts a number of high profile events, most notably the annual World Dairy Expo. Dane County Board chair Sharon Corrigan said the other $47 million for the project will come through public-private partnership, similar to those used to build pavilions on the 165-acre campus

The state money will be included in the capital budget Evers expects to announce next week.

Newly elected Wisconsin Governor Tony Evers delivered his first State of the State Address Tuesday evening at the state Capitol in Madison. The Democrat who defeated Republican Scott Walker in November hit on a number of areas that he has identified as critical to the residents of the state, including good paying jobs, adequately funded K-12 education, accessible and affordable healthcare, a solution to the state’s transportation funding dilemma, clean water, and a middle class tax break.

In his remarks before a joint session of the Republican controlled legislature, the Democratic governor said that fixing the state’s economy remains a priority, even as Republicans point to record low unemployment and demand by employers seeking to fill job vacancies.

But there is more to an economy than counting job creation. And the state of our state is more than just our unemployment rate.

The opportunity we have to offer is not just the number of jobs we create; it’s counted, too, by the number of workers who will work forty hours each week and still won’t make enough to keep their family out of poverty.

Evers, who previously served as the state’s elected Superintendent of Public Instruction, said he’ll submit a budget that will return to providing two-thirds state funding to K-12 school districts in Wisconsin. He’ll also include additional money — a $600 million increase — in special education funding.

The governor also said he will propose a substantial increase in spending on K-12 mental health services.

On health care, Evers said the “People’s Budget,” which he developed during listening sessions around the state with Lieutenant Governor Mandela Barnes, will seek to expand Medicaid in Wisconsin. That’s something that Republican legislative leaders have signaled is a non-starter.

According to the nonpartisan Legislative Fiscal Bureau, this will enable an additional 76,000 Wisconsinites to have access to affordable healthcare. This would also save Wisconsin taxpayers hundreds of millions of dollars, allowing us to reallocate those cost savings to other critical programs.

Evers also announced that he’ll direct Attorney General Josh Kaul to withdraw from a multi-state lawsuit which seeks to overturn the Affordable Care Act. It’s unclear whether Kaul will be able to do that, due to restrictions on his authority passed in December by a lame duck session of the legislature.

Evers said he’ll also address the state’s transportation funding crisis, with the help of his pick to lead the Department of Transportation, Craig Thompson.

I’ve said all along that I believe we have to bring people together to work on this issue, and I believe Secretary-designee Thompson can get it done. In the coming days, we’ll be announcing a task force of stakeholders to get to work on proposing a bipartisan policy solution to be included in The People’s Budget

Thompson, a transportation lobbyist, will need to be confirmed by the state Senate.

Evers also said he’ll declare 2019 as the Year of Clean Drinking Water in Wisconsin, and designate a person in the Department of Health Services to take charge on addressing Wisconsin’s lead crisis and to help secure federal funding for prevention and treatment programs.

And Evers, who campaigned on a promise to provide a middle class tax cut, said again that he would pay for it by capping a tax break for agriculture and industry.

We’re going to cut taxes by ten percent for everyone making up to $100,000 and families making up to $150,000. But we’re not going to do it by spending money we don’t have or that might not be there in two years. I don’t make promises I can’t keep, and I’m not going to propose things that we can’t pay for. So instead, we’re going to fund tax relief for hard-working families by capping a corporate tax credit, 80% of which goes to filers making more than $1 million a year. 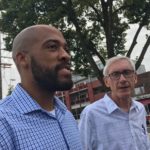 Democrat Tony Evers hopes to convey a message, as he’s sworn in as the 46th governor of Wisconsin. “My message is about something that is kind of old fashioned Wisconsin,” Evers said. “That’s getting along and having civility in public discourse, and finding common ground.”

“Obviously, they haven’t agreed with me a lot, by there’s no personal animosity,” Evers said. “I’ve met with them as DPI superintendent, and I’ve met with them as governor-elect, and I will continue to meet them and try to reach common ground. They’re Wisconsinites, they get it.” 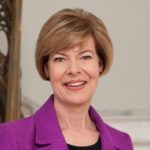 U.S. Senator Tammy Baldwin and here Republican challenger, state Senator Leah Vukmir, drew stark contrasts between one another during their first debate Monday at the University of Wisconsin-Milwaukee.

Baldwin and Vukmir argued about health care, immigration, the #MeToo movement, and abortion during the hour long debate. Their exchanges grew the most heated over the scandal at the Tomah Veterans Affairs Medical Center, where opioids were over prescribed to veterans.

Vukmir accused Baldwin of turning “her back on the veterans of the Tomah VA.” Baldwin shot back that Vukmir was using a Marine veteran’s death for her own political gain. “Leah Vukmir should be ashamed of herself.”

Baldwin is seeking a second term in the U.S. Senate, after defeating former Wisconsin Governor Tommy Thompson in 2012. Prior to that, she served from 1999-2013, representing Wisconsin’s 2nd congressional district. She also served in the Wisconsin state Assembly from 1993-1999. 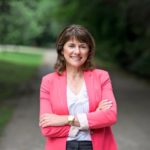 Vukmir is a registered nurse and pediatric nurse practitioner. She currently represents the 5th district in the Wisconsin State Senate. She previously served in the state Assembly from 2002 to 2011. Vukmir was first elected to the 14th district seat after Scott Walker was elected Milwaukee County Executive. She and Governor Walker remain close political allies.

The next U.S. Senate debate is Saturday, October 13th at the UW Center for Civic Engagement on the UW-Marathon County campus in Wausau. The third and final debate will be Friday October 19th at Marquette University in Milwaukee.

Flood damage in Dane County exceeds $100 million. County Executive Joe Parisi said Friday the initial assessment totals $108 million, with about two-thirds of the total to private homes and businesses and a third to public property.

So far, 859 reports have been made to United Way of Dane County, which gathers damage reports. Much of the damage to date has been concentrated in western Dane County. But that could change if more rain falls as expected.

“It’s going to have the water that hits the lake and river pushing water back into the storm sewers, and with no place to go, it’s going to rise into drains and basement floors,” the Mayor said.

Parts of the Isthmus are already seeing standing water, and major roads are expected to be closed for at least a week if not more. Soglin says this is a situation with will simply take time to sort out as water heads out of Lake Monona.

Soglin said that the worries about the Tenney Dam failing are past, and they’re looking to help prevent individual tragedies now. “The dam is operable, the county is finding it’s working fine. I would be more concerned about somebody in a wet basement fooling around with electricity.”

“Dane County residents have shown their resilience over the last week,” said County Executive Parisi. “I am so proud of our first responders, emergency personal and residents who have worked around the clock to help their neighbors and households across the county affected by this horrific event.”