You are here: Home / Archives for Raymond Neupert

The Wisconsin Department of Justice is partnering with the Wisconsin Petroleum Marketers & Convenience Store Association, in an effort to help spot human traffickers. Attorney General Josh Kaul says employees working in places like gas stations and hotels can often be the first to spot trafficking.

Partnership with @WisDOJ, @wistatepatrol, and @WisDCF to help end Human Trafficking. Our industry employs over 50,000 people at nearly 3,000 convenience stores across the state. We’ll use our resources & partners to be a part of preventing human trafficking. #HumanTrafficking pic.twitter.com/znCZ1qy4VP

The initiative is not the only effort to address human trafficking in the state. How to spot trafficking is now part of the training truck drivers receive at the state’s technical colleges.

It was a contentious night in Milwaukee, for President Donald Trump’s Keep America Great rally. The president claimed that Milwaukee County is not cooperating with Immigration and Customs Enforcement.

“The sanctuary county of Milwaukee released an illegal alien criminal, with multiple charges of sexual assault of a child. Think of that, of children? He’s now at large, they’re searching all over.”

Trump took some time to tout low unemployment rates in Wisconsin, and gave some of that credit to a former political rival.

“So now the people of Wisconsin, are gonna say, let’s see, the state’s set a record, most successful it’s ever been. And by the way, that’s because we got a lot of help from a guy named Scott Walker.”

Former Governor Walker was not among a collection of Republicans who took the stage Tuesday night at UW Milwaukee’s Panther Arena.

“I think he’s okay, he gets his check, they refuse to put him on. He says good things about Trump, ‘We don’t want you on!’, that’s CNN.”

Early on in the rally, President Trump was interrupted twice by protesters. Both times the protesters were escorted out by security. Another protester holding a Bernie Sanders sign was also escorted out.

Democrats are again asking the legislative Joint Finance Committee for money to fight homelessness. Governor Tony Evers is seeking $3.5 million to fund programs that were called for through his statewide action plan on homelessness.

That includes money for housing grants, homeless shelters and caseworkers to help those without houses get help they need. That request was sent in November, and Evers said he would have liked a chance to get a hearing before the winter set in.

Evers on Monday sent a letter to the two co-chairs of the Joint Finance Committee, Representative John Nygren, (R-Marinette) and Senator Alberta Darling (R-River Hills), requesting that the budget panel meet Thursday to bypass the Legislature and release funds set aside in the state budget for homelessness initiatives.

Homelessness affects thousands in our state, including kids and families. With the cold winter months already here, we cannot delay on addressing homelessness. The funds are already allocated for this purpose with bipartisan support. Let’s get this done. https://t.co/344NIzA5r4

Democratic members of JFC also sent a letter to the co-chairs, requesting the same action. “There’s absolutely no reason in the world why they should be putting partisan politics ahead of the issue of homelessness,” said Senator Jon Erpenbach (D-West Point.)

The latest Marquette Law School Poll shows that Wisconsinites haven’t changed their minds much about the Presidential election or impeachment. Respondents to the poll have been holding steady when it comes to head to head matchups between President Trump and all of the main Democrat candidates.

Joe Biden holds a small lead against Trump but that’s within the margin of error. Biden, Bernie Sanders, Elizabeth Warren and Pete Buttigieg round out the top 4 Democrats for Wisconsin voters.

A new @MULawPoll, conducted Dec. 3-8, of 800 Wisconsin registered voters finds little change in views of impeachment since the conclusion of public testimony in November.

Forty percent of respondents to the pool say President Trump should be impeached, while 52 percent are opposed. That’s virtually unchanged from last month. 42 percent of respondents said that Trump had done something wrong in regards to the Ukraine scandal, 29 percent say he didn’t. On the election front, The only Democrat to hold a lead over President Trump is Joe Biden, with a 1 percent lead, but that’s within the margin of error. The two have been trading small leads in the pool for the last several months.

The special election for the 7th Congressional District will have a primary on both sides.  Two Democrats and two Republicans have both qualified to run in the election coming next year. Republican state senator Tom Tiffany will face Jason Church, a veteran and aide to U.S. Senator Ron Johnson.

On the Democrats side, Wausau School Board President Tricia Zunker will face businessman Lawrence Dale. Dale was living in Michigan when he announced his run, but now lists a PO box in Eagle River as his address. The primary is set for February 18.

Republican Sean Duffy resigned from the seat earlier this year.

Former state Agriculture Secretary designee Brad Pfaff is back to work for a state agency. Governor Tony Evers office announced Monday that Pfaff has been has been hired to serve as the director of business and rural development in the Department of Administration.

DOA Secretary Joel Brennan said that while the state will lose a vital advocate like Pfaff at the Cabinet level, he’ll still be able to serve both the state and businesses while working for state administration. Pfaff’s appointment to lead the Department of Agriculture Trade and Consumer Protection was rejected by the Senate last week, and Evers named Deputy Secretary Randy Romanski to an interim appointment.

Governor Tony Evers’ pick to head the Wisconsin Department of Agriculture, Trade and Consumer Protection is getting support from a large swath of Wisconsin’s agriculture community as the State Senate’s top Republican calls for his replacement. Executive Director Tom Bressner with the Wisconsin Agri-Business Association said Brad Pfaff needs to stay on the job.

“He has been total supportive. And he just works diligently for agriculture, and we’ve been very pleased and very impressed with the work that he’s been doing. It just makes total sense to us.”

State Senate Majority Scott Fitzgerald said last week that the votes are not in place to support Pfaff in the Senate, which has a scheduled vote on the appointment on Tuesday.  Pfaff and Fitzgerald tangled publicly earlier this year, over the issue of mental health funding for farmers.

Wisconsin is joining a nationwide coalition to prevent robocalls and scam calls from ever reaching your phone. The plan is to implement and improve systems that detect phone calls coming from a robocall center and to allow customers to block them entirely. It would also require phone companies to participate in more in depth investigations of illegal phone usage.

“The volume of robocalls that people receive needs to be reduced dramatically,” said Attorney General Josh Kaul. “The phone companies that are putting these principles into effect are helping with that effort. I hope other companies will join them.”

The program is backed by 51 state attorneys general and a number of major telephone companies. 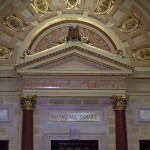 Brian Hagedorn is now officially the newest member of the Wisconsin Supreme Court after his investiture on Wednesday. Hagedorn said the judiciary is separate from the legislative and executive branches for a reason.

“The power to turn policy ideas into law. That’s not my job, that’s the legislative branch,” Hagedorn said.

Hagedorn said he’s worked in private law and with the other branches of the government, but those days are behind him. “In exercising my judicial power, my days of advocating for particular issues or clients are no more.”

Hagedorn was sworn in by outgoing Justice Michael Gableman. Hagedorn defeated Lisa Neubauer in the April elections for his seat on the court. He will now serve a 10 year term as a Justice.

Wisconsin Democrats say they’re going to introduce bills to accept more federal funding for Medicaid and expand Badgercare. It’s a provision that was taken out of Governor Tony Evers budget by Republicans earlier this year.

Evers said this proposed legislation will give Republicans a chance to make things right.

“We know the Legislature did not listen to the people of Wisconsin. That they did not listen when folks called or sent emails or showed up. Now they have an opportunity to fix that.”

Democrats say the state is losing out on funding that already belongs to Wisconsin, and that accepting federal dollars will save the state $320 million over the next two years. The proposal is unlikely to advance in the Republican-controlled legislature.