You are here: Home / Archives for WRN Contributor

Nine out of 10 students in the Wisconsin Class of 2019 completed their high school education in four years. The Wisconsin Department of Public Instruction reports that continues an upward swing.

The graduation rate was 88.6 % in 2017, 89.6 % in 2018 and now 90 percent. The report from State Superintendent Carolyn Stanford Taylor’s office finds improvements among the smaller subgroups of students – like blacks, Hispanics and those learning to speak English.

Answers about the shooting at Molson Coors may not come for a few days. Milwaukee Police said they will not release the names of the five people who were killed in the shooting, or the gunman who took his own life, for the next 24 to 48 hours.

Workers at the plant say a co-worker is the one who started shooting. Milwaukee Police searched a few homes on the city’s northwest side last night that may be tied to the shooter.

State Senator Tom Tiffany will be the Republican candidate in this spring’s special election in northern Wisconsin’s 7th Congressional District.

Tiffany came out of the primary with 58 percent of the Republican vote. He said Tuesday night that his track record in Madison shows he can get things done.

Thank you to the grassroots for a strong victory today, and thank you to @JasonChurchWI for running a strong campaign.

Now it’s time for us to go on and win in May so we can help @realDonaldTrump stop socialism and defend freedom. 🇺🇸 #WI07

Wausau school board president and Ho-Chunk Supreme Court justice Tricia Zunker said she stands apart from Tiffany by having grassroots support and not being a career politician.

“I stand out because I’m not a career politician. I don’t have a corporate sponsored campaign. I’m a community leader, and I’m interested in working hard for people and doing what’s right.”

We did it! Prevailed in the primary tonight as the Democratic candidate for Wisconsin’s 7th CD Special Election! Thank you to all the supporters! We are running a grassroots campaign. Please consider donating today so we flip this seat in May: https://t.co/hSCy66u1rp pic.twitter.com/U1LJSBdJEf

The two will face off in April to serve out the last portion of former GOP Congressman Sean Duffy’s term.

Tuesday is election day in Wisconsin. The primary for Wisconsin Supreme Court will be at the top of the ballot. Jill Karofsky and Ed Fallone are running against incumbent Daniel Kelly. Karofsky is a Dane County circuit judge, and Fallone is a law professor at Marquette University.

Kelly was appointed to the high court by Scott Walker when he was governor. The top two vote-getters will compete in the general election on April 7th.
– 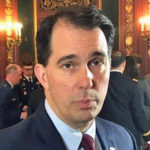 Scott Walker has a speaking engagement next month in the Show Me State. The Springfield News-Leader reports the former Wisconsin governor will deliver the keynote speech on the first night of Lincoln Days, the Missouri Republican Party’s biggest event of the year.

Tickets for the dinner with Walker on Friday, February 21 are 60 dollars online. According a party email, President Trump’s adviser Kellyanne Conway will keynote the Saturday dinner.

Missouri’s statewide elected officials, including Governor Mike Parson, who is running for a full, four-year term, are also expected to speak throughout the weekend.

The founder of Foxconn says the Wisconsin plant is still on schedule to open this year. Bloomberg News reports that Terry Gou made that announcement at a New Year’s Party.

He’s quoted as saying that he will be spending more time in the US this year. Gou recently stepped down as chairman of the company to run for office, but is still on the board of directors and is the largest shareholder.

In the the most recent Marquette Poll, a narrow majority of respondents did not want the president removed from office. “This isn’t a matter of polling,” Baldwin said. “We just took an oath, to do impartial justice on a trial that has yet to have its arguments presented.”

Baldwin said she’s committed to being fair and impartial, but would like to hear the President present his side of the case. Wisconsin’s other U.S. Senator, Republican Ron Johnson, has said there are no grounds for removing the president from office.

Also over the weekend, Congressman Jim Sensenbrenner predicted the needed two-thirds of Senators will not vote to remove President Trump from office. During a visit to the district Sunday afternoon, the veteran congressman said impeachment shouldn’t be used just because people don’t like the results of the 2016 election. Sensenbrenner is the former chairman of the House Judiciary Committee.

The folks who make cheese in Wisconsin are happy to see a new trade deal with Canada and Mexico. The Wisconsin Cheese Makers Association, the American Dairy Coalition, and the Wisconsin Farm Bureau on Friday all said the new agreement will open-up new markets to Wisconsin cheese and milk.

The U.S. Senate approved the USMCA last week. It’s now waiting for President Trump to sign it into law.

The next head of the University of Wisconsin System may not come from academia. The system’s search committee on Friday talked about what they want to see in their next president.

The committee is not requiring the next president to have a doctoral degree. That means someone from the business or political world could get the job.

The next president simply needs 10 years of experience in a ‘significant senior executive position’ and an understanding of public higher education.

The Search Committee convened in December to begin the national search. Faculty, staff, students, and other stakeholders will have several opportunities to provide input on the qualities sought in the next UW System President.  The Committee also invites comments.

It is anticipated the new UW System President will be appointed in late spring.

Leaders of the Catholic Church in La Crosse are naming 25 priests who’ve been accused of sexual abuse.  The Diocese of La Crosse released the list last week. Eighteen of them have died, but all were removed the priesthood.

The diocese says eight of the priests worked in Eau Claire. Seven others worked in Chippewa Falls. You can find a full list of the men accused of abuse online.