You are here: Home / Archives for Politics / Govt

Legislative Republicans continue to challenge Governor Tony Evers over a recording that was made public because of an open records request.

Wisconsin Freedom of Information Council president Bill Lueders says the issue is that Assembly Speaker Robin Vos and Senate Majority Leader Scott Fitzgerald did not expect to be recorded.

“I’m not so sure that it wouldn’t have been a better process if the whole thing had been done in the open. I mean people behave better when they know they’re being watched so I don’t understand why there’s such a need for secrecy about a communication like that.”

Lueders says that even if there’s no documentation about who actually made that recording, it’s probably legally a moot point because only one person who was part of that call needed to consent to it being made.

“I don’t know how you record a conversation among people without someone who is in on that conversation being aware of it. They would have had to facilitate it or allow it in some way.”

The law also doesn’t require any specific documentation for that consent. Lueders says while this is an unusual situation, if someone had simply taken down a transcript there would be no issue.

So far the Evers administration has not identified who the person that made the recording was, only that it was being handled internally.

For years, activists demanded that the Madison Metropolitan School District remove police officers, known as School Resource Officers, from the district’s four main high schools.
The past month has seen protests over the issue, following the killing of George Floyd at the hands of Minneapolis police.

The Madison school board voted unanimously on Monday to terminate the district’s contract with the Madison Police Department for school resource officers, effective immediately.

Opponents of the SRO program say the presence of police in schools negatively impacts students of color and makes them feel unsafe.

Prior to Monday’s vote, board member Ananda Mirilli said the action sends the message that “the bodies of black and brown students will no longer be criminalized.”

“We are also saying that we don’t have all the answers. We are learning to do this anti-racism work alongside many other communities across the U.S., and we won’t stop until we actually get it right.”

Police and supporters say SROs have specific training that makes them better suited to dealing with issues that arise at schools.

Acting Police Chief Vic Wahl said in a statement that SROs “have played an instrumental role in maintaining a safe learning environment” in the high schools.

School board president Gloria Reyes, a former police officer, said the community was clearly telling the board to act now rather than in the future.

“The majority of my colleagues on the board have expressed their support for the removal of SROs. The Madison teachers’ union . . . have supported the removal. The mayor and other elected officials have expressed support to remove.”

Security plans for the district’s high schools have yet to be determined. Reyes announced during the meeting the creation of a safety and security committee to work on what those will look like going forward. The Madison City Council is expected to vote to terminate the contract next month as well.

A federal appeals court has upheld Republican-authored limits on early voting.
Monday’s ruling by the 7th Circuit Court of Appeals will allow 13 days of in-person absentee voting, starting two weeks before Election Day and ending no later than the Sunday before the election.

The appeals court ruling also reinstated several other Republican-backed laws, including a ban on faxing or emailing ballots to voters and a requirement that someone live at an address for at least 28 days to vote.

A lower court ruling that college students can use expired student IDs for voting was upheld.

Wisconsin prisons get an F-plus grade for the way they’re handling the coronavirus.

The American Civil Liberties Union and the Prison Policy Initiative released a report Thursday analyzing states’ responses to the outbreak.

The report issued nine states D grades and every other state received F’s.

Wisconsin has had more than 270 confirmed coronavirus cases in its prisons. The state Department of Corrections reported this week that nearly all have recovered.

At Fincantieri Marinette Marine Thursday, President Donald Trump praised shipyard workers, who will construct a new warship for the U.S. Navy. He also seemed to imply that he had input into the final design of the vessel.

“People don’t realize the talent that we have. We started getting away from it. We started not building in the navy. We haven’t built enough ships. The ships that they were building, they looked terrible. I changed designs, I said ‘that’s a terrible looking ship, let’s make it beautiful.'”

Trump said the ship is beautiful, in his words, “like a yacht with missiles.” The Wisconsin shipyard was awarded a nearly $800 million contract to build a first-in-class guided missile frigate for the Navy, with options for up to 10 ships.

Trump spoke in front of the future USS Cooperstown, and also promised additional investment in the Marinette shipyard and boasted about the advanced design of the vessel.

The president’s visit to northeast Wisconsin also included a taping of a town hall with Fox News personality Sean Hannity, a strong supporter of the president and his policies.

Trump’s presence in the state came the same week as a campaign stop by Vice President Mike Pence, who courted crucial white evangelical voters in the Milwaukee suburbs on Tuesday.

More scale backs are being planned for this summer’s Democratic National Convention.

Mayor Tom Barrett says the core tenants of the convention have not changed.

“The Democrats are going to hold their convention here in the city of Milwaukee and that they’re going to nominate their next candidate for president here in the city Milwaukee and both of those statements have borne out to be true. I’ve also said repeatedly is the keyword following that is nimble because no one could have ever predicted what we have experienced as a nation as a world as a city over the last 4 months.”

However, the D N C has asked state delegates not to make the trip to Milwaukee, and instead votes will be cast digitally. The event is also being moved from the Fiserv Forum to the Wisconsin Center.

Joe Biden is still expected to be in Milwaukee in person to accept the nomination.

The newest Marquette Law School Poll is showing a boost in support for Democrats heading into the November elections.

“So this has been a good gain for Biden at this point and it’s a relatively widespread gain he’s picking up across different regions in different groups.”

Biden’s lead over President Trump was around 3 percent in both March and May.

10 percent of voters said they didn’t intend to vote for either candidate.

President Trump’s approval ratings are also continuing to slip on issues like his handling of COVID-19 and the economy. Fewer Republicans also said they would be voting for the President.

A Wisconsin state Senator said he was attacked by protesters overnight as he was heading to the State Capitol Building.  A  WKOW 27 News crew came across Senator Tim Carpenter (D-Milwaukee) around midnight.  Carpenter said he was assaulted for taking a photo of the protest, an incident he apparently captured in a cell phone video which he posted to Twitter.

A few moments later Carpenter collapsed and an ambulance was called. He was able to get into the emergency vehicle on his own.

I took this pic- it got me assaulted & beat up. Punched/kicked in the head, neck, ribs. Maybe concussion, socked in left eye is little blurry, sore neck & ribs. 8-10 people attacked me. Innocent people are going to get killed. Capitol locked- stuck in office.Stop violence nowPlz! pic.twitter.com/Zw2hdfYG66

Also overnight, two statues on the grounds of the Capitol were taken down, during demonstrations over the Tuesday arrest of an activist. Protesters were demanding the release from jail of 28-year-old Devonere Johnson

Police took Johnson into custody outside a downtown restaurant at around 12:30 p.m. He was tentatively charged with disorderly conduct while armed, resisting arrest and attempted escape.

The Madison Police Department shared video of Johnson inside Coopers Tavern, and of his arrest. The footage inside the Tavern shows Johnson emphasizing that he is disturbing the restaurant and holding a baseball bat while speaking through a bullhorn.  Johnson followed a man into the restaurant that he called a racist.

The two statues that protesters pulled down were of Forward, which normally stands outside the State Capitol at the top of State Street. and left it lying in the middle of the road.

The same group also tore down the Colonel Hans Christian Heg statue on the opposite side of the Capitol a short time later. That statue was then thrown into Lake Monona. Heg was Norwegian immigrant who was killed in action while fighting in the Union Army during the Civil War. 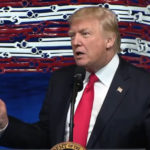 President Donald Trump will be in northeast Wisconsin this week, with events scheduled in Marinette and Green Bay on Thursday.

The president will visit Fincantieri Marinette Marine for a tour of the facility and to deliver remarks, according the White House.

Trump is expected to discuss a $5.5 billion contract to build a new U.S. Navy warship and options for up to nine more.

On Thursday night, conservative commentator and Trump supporter Sean Hannity will host the President in a one hour town hall event from the Jet Air facility at Green Bay’s Austin Straubel International Airport.

The president’s visit will come two days after Tuesday’s campaign trip to the Milwaukee suburbs by Vice President Mike Pence.

Vice President Mike Pence has added another stop to his Wisconsin visit on Tuesday. Pence and Education Secretary Betsy DeVos will visit Waukesha STEM Academy for a school choice roundtable, prior to Pence will addressing the “Faith in America” event at Pewaukee’s Ingleside Hotel. Former Governor Scott Walker is also expected there.

Tickets are free on a first-come, first serve basis. Those attending must acknowledge risks associated with COVID-19, and waive any claims against the Trump campaign, event organizers or the hotel.