You are here: Home / Archives for American Birkebeiner

Akeo Maifeld-Carucci and Alayna Sonnesyn won the men’s and women’s divisions of the 45th American Birkebeiner cross-country ski race in Hayward on Saturday.

Both skiiers won the Birkie for the first time.

Maifeld-Carucci covered the 50 kilometer course in 2 hours 12 minutes 34.9 seconds, finishing just in front of Brian Gregg of Minneapolis by nine-tenths of a second.

Sonnesyn, who is from Plymouth, Minnesota, finished in 2:34:00.1, nearly a minute faster than Anja Gruber. 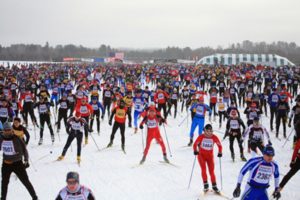 Warm temperatures and rain forced the cancellation of the American Birkebeiner, the world’s largest cross-country ski race.  The race was scheduled for Saturday and called off one day earlier.

It’s just the second time that the 50 kilometer race has had to be cancelled in the 44-year history of the event.

Race officials determined too much of the ski course was unsafe for a timed race.

Some area’s did receive snow on Thursday night, but it was too little and certainly much too late to pull off the race. 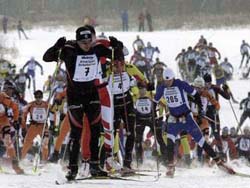 more than 13-thousand skiers  They’ll make the 50-kilometer trek from Cable to Hayward.

It’s not just a local thing either.  Elite racers and citizen athletes from 21 countries and 48 states will take part.

The participants will be in for a treat this year.  Conditions have not been very good the past two years, but officials say with recent snows up north, course conditions are near perfect. END_OF_DOCUMENT_TOKEN_TO_BE_REPLACED