You are here: Home / Archives for American Hockey League

Milwaukee Admirals Owner/CEO Harris Turer announced today (Monday) that the team has opted out of the 2020-21 American Hockey League season due to the financial and related implications caused by the current COVID-19 pandemic.

“We are disappointed that we will be unable to play hockey for the current AHL season,” said Turer.  “Unfortunately the prospect of playing the season without fans and the lack of any revenue was too difficult to manage.  We look forward to getting back on the ice and welcoming our fans back to Panther Arena for the 2021-22 season.  We continue to have a strong relationship with the Nashville Predators and the Wisconsin Center District, who have both been helpful and supportive during this time.  In addition we would like to thank our fans and corporate partners for their backing and dedication and we look forward to working with them as we look ahead to the 2021-22 season and beyond.”

The Admirals have consistently ranked among the AHL’s top teams, winning the 2004 Calder Cup and qualifying for the playoffs 19 times since the 1998-99 season, their first as a Nashville affiliate.”

For the second straight season, the Milwaukee Admirals were swept in the first round of the AHL’s Calder Cup playoffs by the Grand Rapids Griffins.  The Admirals lost 3-2 in overtime on Wednesday night.

That’s 11 straight losses in the playoffs for the Admirals, who now have just one win in their last 16 playoff games.  They haven’t reached the second round since 2011.

The Milwaukee Admirals are one loss away from elimination in their opening round American Hockey League Calder Cup playoff series with Grand Rapids.

The Admirals fell to the Griffins 5-2 on Sunday to fall behind two games to none in their best-of-five semifinal series and will host game 3 on Wednesday night at UW-Milwaukee Panthers Arena.

The Admirals trailed 3-2 in the third when they had to pull their goaltender.  The Griffins scored a pair of empty net goals to put the game on ice.

The Milwaukee Admirals have tied a team-record for their longest point streak with a 3-1 home ice victory over the Chicago Wolves on Tuesday night.

Trevor Murphy scored the game-winner with more than four minutes to play.  Max Reinhard had one goal and one assist and Juuse Saros had 28 saves in goal.

The Admirals have now scored at least one team point in their last 13 games, something they haven’t done in 23 years.  The streak includes eleven wins and two shutout losses, and they’ve won their last seven games.

The Admirals have clinched the American Hockey League’s Central Division crown and they still have an outside chance of winning the Western Conference title.  Ontario can secure that distinction with two points in their final two games.

The Milwaukee Admirals have swept their two-game series at Manitoba, pulling out a 5-2 win over the Moose on Wednesday night.

Pontus Aberg scored twice and Marek Mazanec had 27 saves in goal in the victory.

The Admirals have now picked up at least one team point in their last ten games, and their magic number to clinch the American Hockey League’s Central Division crown is down to six points.

Milwaukee has 95 points, seven more than Grand Rapids, Rockford and Lake Erie which are all tied for second.

The Admirals, who clinched a playoff spot last weekend, have 45 wins for the first time in seven years. 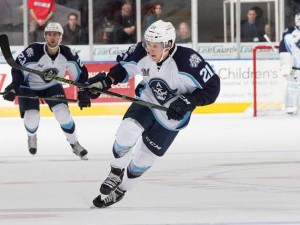 The Milwaukee Admirals have won a team-record ten straight games, knocking off San Antonio 6-3 at the BMO Harris Bradley Center on Tuesday night.

Victor Arvidsson scored a pair of power play goals, which extended his personal points’ streak to 13 games.  That’s the longest in the American Hockey League this season.

Taylor Aronson and Vladislav Kamenev each had a pair of assists for the Admirals.

The Admirals shoot for their 11th straight win when they host Grand Rapids on Friday night.

The Milwaukee Admirals and Nashville Predators announced today that the two clubs have extended their affiliation agreement through the 2016-17 season.

During their time with the Predators the Admirals have accumulated a 660-437-31-56-90 record, good for a .588 points percentage.  The Ads have won four Division Titles, two conference crowns and won the Calder Cup Championship in 2004.  Milwaukee became the first team in AHL history to record 40 or more wins in 10 straight seasons and they have posted 90 or more points in nine of the past 11 seasons, including five years when they have broken the 100-point plateau.  Including this past season the Admirals have accumulated the second-most points, behind only Hershey, in the AHL since joining in 2001-02 after 24 seasons in the International Hockey League.

The Milwaukee Admirals were eliminated from the AHL’s Calder Cup Playoffs with a 2-0 loss to the Toronto Marlies last night in Toronto.

The win gives the Marlies a three-game sweep of the Admirals in the Western Conference quarterfinals and marked the third straight season the Admirals were ousted in the opening round.

The Milwaukee Admirals look to stave off elimination tonight (Thursday) when they face the Toronto Marlies in game three of their best-of-five Western Conference Quarterfinal matchup at Ricoh Coliseum in Toronto.

The Marlies grabbed the first two games of the series at the BMO Harris Bradley Center, outscoring the Admirals 11-4.  Three of those 11 goals were empty netters and four more came on the power play.

The Admirals are looking to improve on special teams.  They’re just 1 for 12 on the power play (8.3%), while the penalty kill has allowed four goals in 16 chances.

If the Admirals win tonight, they would force a game four on Saturday afternoon in Toronto (2pmCT).