You are here: Home / Archives for B.J. Coleman

With a preseason quarterback rating of 49.6, it would appear to be obvious that B.J. 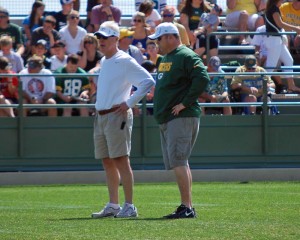 Coleman isn’t ready to be the Green Bay Packers backup behind Aaron Rodgers.  But barring another roster move, Coleman is currently sitting in the #2 seat.

He completed just 41% of his passes, ranked 110th in the league in accuracy and 106th in passer rating among 115 NFL quarterbacks who threw at least one pass during the preseason.

So why is Coleman still on the 53 man roster?  Perhaps General Manager Ted Thompson will make a move for a more experienced backup, but the simple fact that Coleman is still here in the #2 spot is puzzling. END_OF_DOCUMENT_TOKEN_TO_BE_REPLACED

Vince Young is on the Green Bay Packers practice field this morning, after signing a 1-year contract with the team.

The Packers saw enough from Young in their workout on Monday to keep him in Green Bay, where he is expected to compete with Graham Harrell and B.J. Coleman for the backup job to Aaron Rodgers.

The 30-year-old Young was the third-overall pick in the 2006 NFL Draft.  He has played in 60 career games with 50 starts in his six NFL seasons with Tennessee and Philadelphia.

It’s not certain if Young will get enough of the offense to play in Friday’s preseason opener against Arizona, or if he’ll be able to learn the offense sufficiently during the rest of training camp to be able to win the backup job.

The Packers open the season Sept. 8 against the San Francisco 49ers and then host the Washington Redskins the next week.  At the very least, Young should provide the Packers defense with a good scout look for Collin Kaepernick and Robert Griffin III.

Young went 30-17 as a starter in Tennessee.  But the last time he played in an NFL regular season game was in 2001 with Philadelphia. 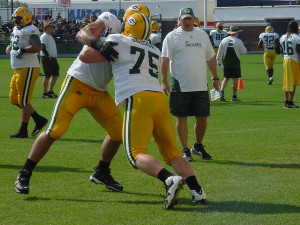 The Packers have a practice in shells this afternoon (closed to the public).  Mike McCarthy will address the media after that workout. END_OF_DOCUMENT_TOKEN_TO_BE_REPLACED

As training camp gets ready to open Friday, Packers General Manager Ted Thompson has made a tweak to the roster.

Tuesday, the team announced that they released rookie QB Matt Brown.  Brown was signed as an undrafted free agent out of Illinois State back in May.

That leaves the Packers with a trio of signal callers heading into camp; Aaron Rodgers, Graham Harrell, and B.J Coleman.  This move shouldn’t come as a surprise as Coleman and Harrell are expected to battle for the back-up spot behind Rodgers.  With limited practice time since the new CBA in 2011, this will allow the two to get more snaps. 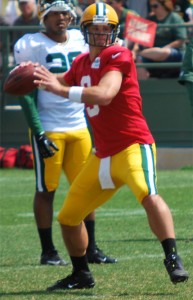 This pre-season game is also the last major opportunity for players to impress coaches on the big stage before the first round of mandated cuts occurs.  The NFL requires teams to cut their rosters down to 75 players by Monday afternoon.  However, there are two full pad practices for bubble players to make sure they impress coaches before the deadline on Monday. END_OF_DOCUMENT_TOKEN_TO_BE_REPLACED