You are here: Home / Archives for Big Ten Championship

Penn State has been the best big play offense in the country.  Wisconsin has been one of the best big play defenses in the nation.  The two teams will hook up Saturday night in the Big Ten Championship game at Lucas Oil Stadium in Indianapolis.

The Nittany Lions boast the Big Ten’s Offensive Player of the Year in running back Saquon Barkley to go along with big play quarterback Trace McSorley.

It’s McSorley that has been at the forefront of Penn State’s playmaking prowess.  Twenty of the 26 plays of 40 or more yards have come from McSorley finding Penn State receivers.  He’s willing to throw into coverage because his receivers make plays.

The Badgers are as well equipped defensively to contest McSorley and his band of playmaking threats. END_OF_DOCUMENT_TOKEN_TO_BE_REPLACED

END_OF_DOCUMENT_TOKEN_TO_BE_REPLACED 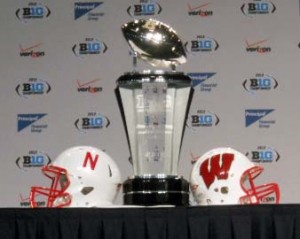 The Badgers beat Michigan State in last years Big Ten title game and those that were along for the ride will have gained some valuable experience.  Phillips isn’t a part of that group.  Last season, Phillips didn’t even make the trip. END_OF_DOCUMENT_TOKEN_TO_BE_REPLACED