You are here: Home / Archives for Brian Posick 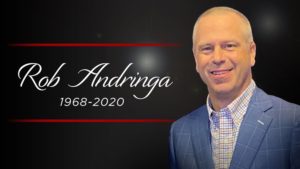 Madison native and former Wisconsin Badger hockey standout Rob Andringa passed away on Friday after a long battle with stage 4 colon cancer.  He was 51.

Andringa played in a program-record 179 games from 1987-’91.  He finished seventh on the all-time list for assists by a Badger defenseman with 88.  Andringa was 10th  all-time in points for a UW defenseman with 103.

Andringa helped UW win the 1990 NCAA title under Jeff Sauer and later served as an analyst on both radio and television broadcasts for Wisconsin men’s hockey.  He partnered with Brian Posick on WIBA Radio in Madison to call the three overtime win (1-0) over Cornell in the 2006 NCAA Regional in Green END_OF_DOCUMENT_TOKEN_TO_BE_REPLACED