You are here: Home / Archives for Bronson Koenig

After sitting all but five minutes of the first half with foul trouble, senior guard Bronson Koenig took over in the second half, scoring 17 points to lead the Wisconsin Badgers to a 66-49 win over the Minnesota Gophers on Senior Day at the Kohl Center.

Koenig hit five of seven three-pointers in the second half, after the Badgers trailed by two at halftime.

The Badgers (23-8, 12-6 Big Ten) snapped a three game losing streak and secured the number-two seed and double bye in the Big Ten Tournament in Washington D.C. this week.  The Badgers finished tied for second place in the Big Ten with Maryland (24-7, 12-6), but the Badgers won the head-to-head tiebreaker.

The Wisconsin Badgers certainly weren’t setting the world on fire, but they did appear as if they would pick up a much needed Big Ten win to stay in the Big Ten title hunt.

Then a play here and play there, a couple of missed free throws and the heroics of an opposing freshman turned victory into defeat as the Iowa Hawkeyes escaped the Kohl Center with a 59-57 win over Wisconsin.

The Badgers suffered their third straight defeat and fifth in the last six games and will now play their final regular season game on Sunday against Minnesota in a battle for the 2-seed in the upcoming Big Ten Tournament.  The Badgers can still secure that with a win on Senior Day.

The Badgers led by nine points with 4 minutes and 46 seconds left.  They were up five with 2:03 left to play.  But two turnovers against Iowa’s full-court pressure and the Hawkeyes closed the game on a 7-0 run to pull out the win. END_OF_DOCUMENT_TOKEN_TO_BE_REPLACED

After Purdue did Wisconsin a favor by losing on Saturday, the Badgers missed a chance to move back into first place atop the Big Ten, falling to Michigan State 84-74 on Sunday in East Lansing, Michigan.

Michigan State (18-11, 10-6) continued to look like a team destined for the NCAA Tournament, winning for the fourth time in their last five games.

Nigel Hayes scored 22 points and pulled down 11 rebounds, but missed eight of his 12 free throw attempts.  The Badgers as a team made just 13 of 25 at the line. END_OF_DOCUMENT_TOKEN_TO_BE_REPLACED

Koenig was held out of the Michigan game last week with a left-calf injury and came off the bench against Maryland.  But he played 31 minutes in Wisconsin’s 71-60 win over the Terrapins.

Koenig’s shooting numbers slumped after he suffered the injury in a January 24 game against Penn State.  But he still hit several big shots along the way.

While Koenig isn’t fully recovered, but he is feeling much better.  Koenig is hoping his shooting touch will return, just in time for the stretch drive and the upcoming NCAA Tournament.

AUDIO: Bronson Koenig says it was good to hit shots against Maryland :08

AUDIO: Koenig says in hindsight, not playing at Michigan was good :15

Wisconsin failed to shoot 40% or better in five of their last six games and started Sunday’s game by hitting just 28% from the floor (7 of 25) in the opening half.  But this time the Badgers rebounded, shooting 51.5% (17 of 33) in the second half. END_OF_DOCUMENT_TOKEN_TO_BE_REPLACED 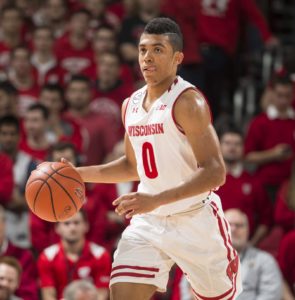 Badger coach Greg Gard made the announcement this morning after Koenig missed the last two days of practice with a left-calf injury.

Koenig is averaging 13.4 points a game this season, shooting 41.6% overall and 37.9% from three-point range.  But he has struggled since suffering the calf injury in late January.  Over the last five games, Koenig has hit just 25% of his field goal opportunities and 22% from distance.

Trice did play much better against Northwestern on Sunday, scoring 11 points and pulling down six rebounds.

The Badgers head into tonight’s game against the Wolverines, just a half-game in front of both Purdue and Maryland.

Wisconsin beat Michigan in the first meeting this season, 68-64 in Madison.

Bryant McIntosh scored 25 points and added 7 rebounds and 7 assists as the Northwestern Wildcats knocked off the 5/7 ranked Wisconsin Badgers 66-59 on Sunday night at the Kohl Center.

It’s a big win for the Wildcats, who are trying to secure a bid to their first-ever NCAA tournament.  Northwestern beat Wisconsin for the second straight year and third time in the last five meetings.

The race for the Big Ten title drew closer as well.  Wisconsin’s loss means the Badgers have just a one game lead over both Maryland and Purdue.

Followers of Wisconsin basketball could see this coming.  The Badgers (21-4, 10-2 Big Ten) struggled with their shooting over the past four games (37% FG & 25% 3-point FG). END_OF_DOCUMENT_TOKEN_TO_BE_REPLACED