You are here: Home / Archives for Bruce Seid 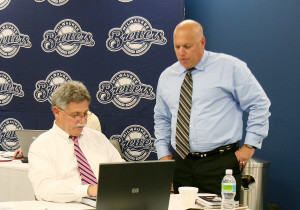 The Milwaukee Brewers are mourning the death of Bruce Seid, their director of amateur scouting.  Seid has been a member of the organization for 17 years and passed away unexpectedly while visiting family in Las Vegas.  He was 53.

In a statement this morning, Brewers general manager Doug Melvin said, “We are stunned and devastated by the news of Bruce’s passing.  He was a great friend to all of us, and no words can describe the sense of loss we feel.  There are only a few people who have been with the Brewers as long as Bruce, and he was a kind and highly respected member of our organization.

“There are also very few who worked with the passion and dedication to the Brewers that Bruce did.  A number of current players on our roster were given the opportunity to play major league baseball because of Bruce, and he was so proud of them.  Our thoughts and prayers are with his wife, Erika, and all of Bruce’s family.”

Seid was in his sixth season as the teams director of amateur scouting.

Brewers pitcher Mike Fiers was the first player selected during Seid’s tenure as scouting director to play in the majors.  Fiers was taken in the 22nd round of the 2009 draft out of Nova Southeastern University.

Seid’s scouting career began in 1992 with San Diego.  He was a former fourth-round draft choice of the Chicago Cubs in 1980, spending three seasons in the minor leagues as a second baseman.

The Brewers started in round 1, using the 12th overall pick on left-handed pitcher Kodi Medeiros.  The 6’2, 195 hard throwing lefty was clocked at 97 mph during a May 29th workout at Miller Park.  The Brewers say he’ll be a starting pitcher.

Medeiros went 7-1 with a 0.97 ERA with 83 strikeouts against 14 walks in eight games this past high school season.  He becomes the first Hawaiian high schooler to be drafted in the first two rounds since 2001, and the highest-drafted native Hawaiian ever.

The Brewers also selected shortstop Jacob Gatewood from California with the 41st pick in the Competitive Balance Round A and outfielder Monte Harrison out of Missouri in the second round with the 50th selection.

The 6’5 Gatewood won the junior portion of the home run derby at the All-Star Game at Citi Field in July.  Gatewood has signed with USC and was non-commital when asked if he would sign.

Harrison has committed to play both baseball and football at Nebraska.  He’s considered one of the best athletes in the draft, but the Brewers may have a hard time signing him.  But Brewers Amateur Scouting Director, Bruce Seid considers him worthy of the risk.

The Brewers will select eight more players in rounds 3-10 today.  The final day of the draft is Saturday.

player available with their top three picks in the Major League Baseball Amateur Draft on Monday.  But after loading up with pitching in recent drafts, it was time to load up on offense in the early rounds and the Brewers grabbed three sluggers on the first day of the draft.

With the number 27 pick, the Brewers selected catcher Clint Coulter of Union High School in Camas, Washington, and outfielder Victor Roache out of Georgia Southern.  The Brewers also had a supplemental pick at #38 for losing Prince Fielder to the Tigers.  They selected Cal Poly San Luis Obispo outfielder Mitch Haniger. END_OF_DOCUMENT_TOKEN_TO_BE_REPLACED