secondary this season.  Several of them have been pressed into service because of injuries.  But the Packers could soon be getting one of those top veterans back.

The target date for Woodson’s return is the Dec. 16th game at Chicago against the Bears.  Woodson has missed 5-games with a broken collarbone.

AUDIO: Dom Capers on what Charles Woodson can bring upon his return :21

The Packers will obviously welcome back Woodson because he’s a playmaker.  But who takes a back seat with his return?

Rookie Casey Hayward has performed well in the slot.  He has 5 interceptions and 15 more pass breakups.

Defensive Coordinator Dom Capers said he’s been watching Woodson run occasional routes on the scout team and doesn’t see anything wrong.  But it’s just a matter of time when they feel Woodson will be able to take some hits on his shoulder.

Woodson is expected to miss at least six weeks of action, which would see him return with around 3-weeks left in the season.  McCarthy said he expects him to return this season and will give him every opportunity to do so.

It’s the same collarbone that Woodson broke in the Super Bowl, but McCarthy said this one isn’t as bad.

Woodson will remain on the Packers active roster and McCarthy said he fully expects the next players in line to step up and play better defense.

That same defense however, gave up 377 total yards, including 186 on the ground.  Last season, the Packers ranked high in take/aways.  Yesterday, they forced no San Francisco turnovers.

Yet somehow, Packers veteran safety Charles Woodson is encouraged by their play.

Woodson did give the 49ers credit for their performance. 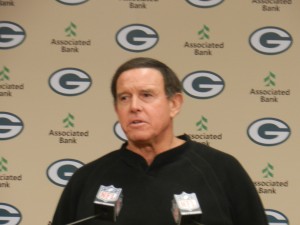 At some point down the road, everyone will look back at this record-breaking

Packer Nation didn’t know how to act walking out of Lambeau Field after yesterday’s game.  They just watched their team blow up in every facet of their game.  The Packers turned it over 4 times. had a number of dropped passes, couldn’t stop the Giants passing game and gave up a Hail Mary touchdown at the end of the 1st half to go up 10 on the Packers. END_OF_DOCUMENT_TOKEN_TO_BE_REPLACED