You are here: Home / Archives for Chicago Bulls

The Milwaukee Bucks pulled off a four-game season series sweep over the Chicago Bulls, winning Monday evening 111-98 at Fiserv Forum.

It was a sloppy performance by the Bucks, who tied a season high with 23 turnovers, including 15 in the first half, in winning their seventh straight game.  In winning all four games against the Bulls this season, the Bucks ran their overall win streak against Chicago to 10.

Giannis Antetokounmpo tied his career high of eight turnovers to go along with a triple double (28 points, 14 rebounds, 10 assists).

The Bucks might have had their minds elsewhere, getting ready to board a plane for Paris after the game.  They will face the Charlotte Hornets there END_OF_DOCUMENT_TOKEN_TO_BE_REPLACED

The Milwaukee Bucks didn’t play well or shoot well in the first half and went into the locker room at halftime with a narrow three-point lead over the Chicago Bulls.

The second half was different.  The Bucks busted out in the third quarter, hitting 71.4% from the field and built a 16 point lead, on the way to a
123-102 win over the Bulls at the United Center.

Khris Middleton scored a game high 25 points and Giannis Antetokounmpo returned after missing two games with back soreness to score 23 points and pull down 10 rebounds in the win.

Eric Bledsoe also returned to the Bucks lineup after missing eight games due to an avulsion fracture to his right fibula.  He was on a minutes restriction and finished with 15 points in 16 minutes.

Ersan Ilyasova had 14 points and 11 rebounds, his third straight double-double and Robin Lopez added 11 points against his former team.

The Bucks improved to an NBA best 30-5 and will host the Minnesota Timberwolves on Wednesday night at Fiserv Forum.

Giannis Antetokounmpo compiled 33 points and 10 rebounds as the Milwaukee Bucks knocked off the Chicago Bulls 115-101 at the United Center in Chicago.  The Bucks extended their win streak to four with the final game of their road trip in Atlanta on Wednesday night.

Brook Lopez added 19 points, 10 rebounds and five blocked shots and George Hill came off the bench to add 18 for the Bucks (10-3), who improved to 7-2 on the road this season.

Antetokounmpo spent the night in foul trouble and played the final half of the fourth quarter with five fouls but avoided fouling out.

Rookie Daniel Gafford led the Bulls with 21 points off the bench.  Coby White added 13 for the Bulls, who lost their third straight, falling to 4-10.

Playing without a number of their regulars, the Milwaukee Bucks opened the exhibition season with a 122-112 win over the Chicago Bulls at the United Center.

The Bucks also got 12 points and 9 rebounds from Sterling Brown.  Point guard Frank Mason III started at point guard and scored 14 points with six assists and four steals in 27 minutes.

The Bucks return home to host the Utah Jazz at Fiserv Forum on Wednesday night.

Playing without star Giannis Antetokounmpo, the Milwaukee Bucks opened a five-game road trip with a 117-106 win over the Chicago Bulls at the United Center on Monday night.

Antetokounmpo was held out because of a sore right knee.  The Bucks were also without guards George Hill and Sterling Brown as well, but Khris Middleton and Malcolm Brogdon led the way with 22 points each.  The effort gave the Bucks their 5th straight win and 8th straight road victory.

Ersan Ilyasova got the start in place of Antetokounmpo and finished with 10 points and six rebounds.  Nikola Mirotic had 13 points against his former team and Pat Connaughton came off the bench with 10 points, six rebounds and five assists. END_OF_DOCUMENT_TOKEN_TO_BE_REPLACED

Giannis Antetokounmpo returned to the Milwaukee lineup on Monday night and led the Bucks to a 112-99 win over the Chicago Bulls at the United Center.

Antetokounmpo had 29 points, 17 rebounds and eight assists, good for his 39th double-double of the season.  He returned to action after sitting out his fourth game of the season on Saturday against Orlando, due to right knee soreness.  Eric Bledsoe added 19 and Malcolm Brogdon 17 to lead the Bucks.

The Bucks built a 14-point lead midway through the fourth quarter, but the Bulls’ 11-0 run late in the quarter cut the Bucks lead down to three points with less than three minutes to play.  The Bucks finished the game with a 12-2 run to seal the win. END_OF_DOCUMENT_TOKEN_TO_BE_REPLACED

Khris Middleton hadn’t even attempted a shot in the fourth quarter, but after a scramble, the ball wound up in Middleton’s hands and he buried a three-pointer from the top to give the Milwaukee Bucks a 116-113 win over the Chicago Bulls.

Point guard Eric Bledsoe tapped a missed shot out to Malcolm Brogdon.  Brogdon then kicked the ball back to Middleton who buried the game winner with 5.2 seconds left.  Middleton finished with 17 points.  Brogdon had 24, including all six of his three-point attempts.  Giannis Antetokounmpo led the way with 36 points, 11 rebounds and eight assists to lead the way.

The Bucks improved to 15-6 with the win.

Zach Lavine and Jabari Parker had 24 points each in defeat for the Bulls.

Milwaukee is off until Saturday when they take on the Knicks in New York.

The Milwaukee Bucks knocked off the rival Chicago Bulls 110-96 on Sunday in Chicago, which means Joe Prunty is off to a 3-0 start as the Interim Head Coach of the Bucks.

Prunty shoots for his fourth straight victory tonight when the Bucks host the Philadelphia 76ers at the BMO Harris Bradley Center.

The Bucks got off to a slow start on Sunday , but veteran Jason Terry came off the bench to add three straight three-point baskets late in the first quarter into the second quarter.  He finished 4-of-6 beyond the arc for a season-high 12 points.  Terry entered the game just 2-of-18 from three-point range on the season.

From that point, the Bucks increased their lead and went into the locker room at halftime with a 61-42 lead.

Giannis Antetokounmpo got hot in the second half and finished with 27 points, nine rebounds and eight assists to lead the Bucks.

The Bucks played their second straight game without Malcolm Brogdon, who is sidelined with right calf soreness.

Rookie Sterling Brown, who grew up just a short drive from the United Center, had 12 points and six rebounds.

The Bucks lost at Philadelphia on Jan. 20, 116-94 when they were without both Giannis Antetokounmpo and Malcolm Brogdon.

The Milwaukee Bucks dropped their second straight game, falling to the rival Chicago Bulls 115-106 on Tuesday night at the BMO Harris Bradley Center.

The Bucks committed a season high 17 turnovers.  They were out-rebounded 47-41, which continues to be a problem for the Bucks.

The Bulls scored on seven straight possessions early in the fourth quarter, outscoring the Bucks 32-23 in the final period.  They never got any closer than six points over the final seven minutes.

Giannis Antetokounmpo had 28 points, Erik Bledsoe added 22 and Malcolm Brogdon came off the bench to scored 18 points to lead the Bucks.  It’s the second home loss to the Bulls in the last two weeks.

The Bucks are back home on Thursday night to play the Minnesota Timberwolves at the Bradley Center. 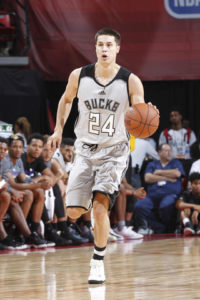