You are here: Home / Archives for Chicago White Sox

The Brewers took the lead in the 5th when Garcia drove in two runs with a single to left.  Ben Gamel’s sixth inning single to center scored Justin Smoak to put the Brewers up 4-2. END_OF_DOCUMENT_TOKEN_TO_BE_REPLACED

The Milwaukee Brewers will be looking for a new starting catcher after last seasons starter, Yasmani Grandal, agreed to a four-year deal with the Chicago White Sox worth $73 million.  It’s the largest deal in White Sox history.

Grandal signed a one-year deal with the Brewers last season, worth $18.25 million.  He gets the same figure with the White Sox per season, but a four-year deal instead of just one.

The Brewers have Manny Pina but the 32-year-old is considered primarily as a backup.  It will likely leave them searching for catching help in free agency or through a trade.

The Milwaukee Brewers lost the rubber match of their weekend series with the White Sox 6-1 in Chicago on Sunday.

Daniel Palka and Adam Engel clubbed back-to-back home runs in the sixth inning as the White Sox scored six unanswered runs to pull out the win.

The Brewers scored their only run when Manny Pina scored on an error to take a 1-0 lead.

The White Sox took two of three in the series to improve to 18-38.

Brent Suter gave up two runs in five innings and suffered the loss.  They’re 37-23 and have a two-game lead on the Chicago Cubs in the NL Central.

The Brewers scored just nine runs in the three games and went 0 for 16 with runners in scoring position in the series.

The Brewers are off today and open a short two-game series in Cleveland against the Indians on Tuesday night.  Junior Guerra (3-3, 2.65) will pitch for the Brewers.  Corey Kluber (8-2, 2.02) will get the series opening start for the Indians.

With the division rival Chicago Cubs pulling off a sizeable deal with the crosstown Chicago White Sox today, the Milwaukee Brewers didn’t necessarily match it, but they made a deal of their own none-the-less.

The Brewers will decide before they return to action tomorrow night whether  to add Webb to their bullpen or assign him to Colorado Springs.  The Brewers have a roster spot available after putting starter Junior Guerra on the 10-day DL with a bruised shin.

Webb pitched twice against the Brewers last weekend in New York and seven times for the Yankees this season, posting a 4.50 ERA over six innings.  He END_OF_DOCUMENT_TOKEN_TO_BE_REPLACED 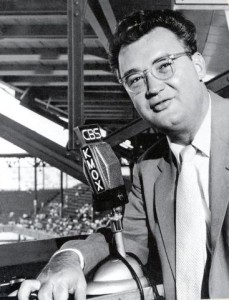 A colleague of mine, Bill Pollock from Missourinet.com put together this preview piece on longtime baseball announcer Harry Caray.  Enjoy!

Mention Harry Caray’s name and most people now will associate Will Ferrell’s horrible imitation with the great broadcaster.  Perhaps you may even be saying to yourself, why do we have an article on Missourinet.com on a former Cubs announcer?  Ahh, young one you have much to learn.

Caray got his baseball broadcasting start at KMOX in St. Louis calling Cardinals game in 1945 until 1969.  After one season in Oakland, Caray moved onto the Southside of Chicago and became the White Sox TV announcer until 1982 when he took over the Cubs’ calls on WGN until his death following the 1997 season.

This month marks the 18th anniversary of Caray’s death.  His life and career will be covered in MLB Network’s documentary series, “MLB Network Presents.” The premiere of the one-hour “Holy Cow! The Story of Harry Caray” airs tonight at 8 p.m. CT.

“He was just a really good baseball announcer,” Buck said in the film as reported by MLB.com. “I think that kind of gets lost in the creation that’s been this Harry Caray character.”

Watch tonight, you’ll gain an appreciation for just how good the man was at his craft.