You are here: Home / Archives for Cincinnati Reds 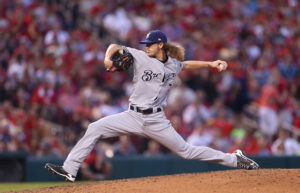 The Milwaukee Brewers clinched a wildcard playoff spot on Wednesday night.  After celebrating the victory, they got up Thursday morning and beat the Reds again, this time 5-3.  The Brewers kept pace with Washington for the top wildcard spot and moved to within a game of the idle Cardinals in the Central Division.

The division leading Cardinals lost again on Wednesday as the Brewers climbed to within a game and a half of St. Louis.  If the Brewers can win today, they’ll move to within a game of the Cardinals, who have the day off.  The Brewers also trail the Nationals by one-game in the chase for the top wildcard spot. END_OF_DOCUMENT_TOKEN_TO_BE_REPLACED 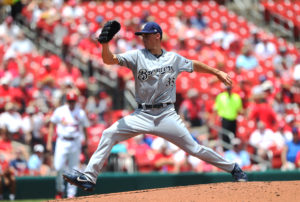 The Milwaukee Brewers stayed hot, winning their fifth straight game, 4-2 over the Cincinnati Reds at Great American Ballpark on Tuesday night.  It’s the 16th win in the last 18 games and moved the Brewers to 18-4 in the month of September.

With the Chicago Cubs falling to the Pittsburgh Pirates 9-2, the Brewers magic number to clinch a wildcard playoff spot is now down to one.

Sonny Gray entered the game for Cincinnati with a 2-0 record and 1.85 ERA in four starts against the Brewers this season.  But the Brewers got three early runs off of him and let their bullpen do the rest.

Cincinnati scored first, on back-to-back doubles from Joey Votto and Aristedes Aquino in the bottom of the first inning.  The Reds increased their lead to 2-0 after Ryan Braun’s attempt at a diving catch failed. END_OF_DOCUMENT_TOKEN_TO_BE_REPLACED 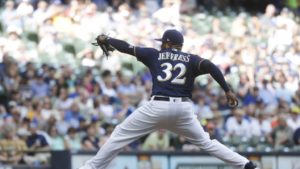 Tyler Saladino was looking to play hero for the second straight day, but the Brewers bullpen didn’t allow for it to happen as Milwaukee suffered a 6-5 loss in their series opener against the Cincinnati Reds at Miller Park on Monday night.

Saladino took a first pitch fastball and homered to straight away center, his second grand slam in as many days.  It put the Brewers up 5-4 and their third straight come-from-behind win in sight.

However, Josh Hader wasn’t available to slam the door in the ninth and that proved trouble for the Brewers.  They instead went with Jeremy Jeffress for the third straight day.  Jeffress hung a breaking ball to Eugenio Suarez, who deposited it into the seats in left center, giving the Reds the comeback win. END_OF_DOCUMENT_TOKEN_TO_BE_REPLACED

Luis Castillo allowed one hit over 7.2 innings and Raisel Iglesias worked around a leadoff double in the ninth inning to notch the save as the Cincinnati Reds beat the Milwaukee Brewers 1-0 Thursday afternoon.

It was the second straight shutout for the Reds, who held the Brewers scoreless over the last 23 innings of the series.  Castillo struck out nine and didn’t walk a batter.  Brandon Woodruff was the tough-luck loser for the Brewers, allowing one run over six innings.
Christian Yelich led off the ninth inning with a double, but was left stranded after Iglesias retired Mike Moustakas, Keston Hiura and Eric Thames to notch the save.
Despite the loss, the Brewers are still tied for the lead in the NL Central with the Cubs at 46-42.  The five teams in the division are separated by just five games.  Milwaukee opens a weekend series in Pittsburgh Friday night, with Zach Davies throwing against Steven Brault.

Brandon Woodruff struck out a career high 12 batters to help lead the Milwaukee Brewers to their second straight win, 7-5 over the Cincinnati Reds at Miller Park on Sunday.

Woodruff improved to 9-2.  The nine wins ties him with Jyun-Jin Ryu of the Los Angeles Dodgers for the most wins in the National League.

Woodruff  allowed three runs in seven innings to pick up the win.  Jeremy Jeffress allowed two runs in the ninth before closing out the Brewers victory.

Reds starter Anthony DeSclafani struck out all six Brewer batters he faced in the first two innings.  But Travis Shaw clubbed a long home run in the third, setting off a five run outburst by the Brewers. END_OF_DOCUMENT_TOKEN_TO_BE_REPLACED 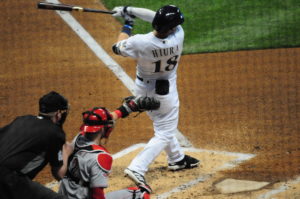 Milwaukee Brewers starter Gio Gonzalez surrendered three runs in the first inning and the Cincinnati Reds made that hold up.  The Reds pulled out a 3-0 victory in the series opener on Tuesday night at Miller Park.  It’s the first time the Brewers have been blanked on the scoreboard this season.

Sonny Gray blanked the Brewers for six innings, striking out nine and securing his first win of the season.  Three Reds relievers finished the victory for Gray as the Brewers went down via the strikeout 14 times on the night.  They were 0 for 6 with runners in scoring position.

Right-fielder Christian Yelich was scratched from the lineup before the game with back spasms.  He’s not in the lineup for Wednesday’s series finale either.

The Brewers best chance came in the first inning when Lorenzo Cain led off the inning with a double. END_OF_DOCUMENT_TOKEN_TO_BE_REPLACED 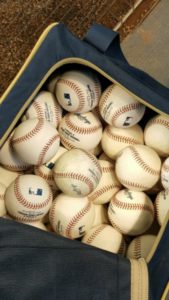 Freddy Peralta bounced back from a shaky first outing and tossed a gem in Cincinnati, leading the Milwaukee Brewers to a 1-0 win over the Reds on Wednesday at Great American Ballpark.

Peralta allowed just two hits over eight innings, striking out 11 and walking nobody as the Brewers swept the three-game series.  It’s their fifth straight win, improving to 6-1.

Alex Wilson worked the 9th inning and earned the save.  he allowed a lead off walk to Tucker Barnhart, then retired the next two hitters.  With two outs, Matt Kemp singled to put runners on 1st and 3rd before Wilson got Eugenio Suarez to ground into a force at second to end the game.