You are here: Home / Archives for Cotton Bowl 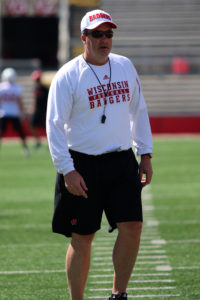 Wisconsin football coach Paul Chryst, who helped lead the Badgers to a number-8 ranking and berth in the January 2nd Cotton Bowl, was named a finalist for a national coach of the year award.

Chryst join’s Western Michigan’s P.J. Fleck, Colorado’s Mike MacIntyre, Navy’s Ken Niumatalolo and Washington’s Chris Peterson as finalists for the Dodd Trophy.  The Dodd trophy is named after former Georgia Tech coach Bobby Dodd.  The winner will be announced during the week of the Peach Bowl, which will be played Dec. 31 in Atlanta.

The Badgers will face number-14 Western Michigan (13-0) in the Cotton Bowl.

The Wisconsin Badgers will make their 15th-straight bowl appearance against Western Michigan in the Cotton Bowl on January 2, 2017 in Arlington, Texas.

Kickoff is set for noon (CT) at AT&T Stadium and will air on ESPN.  It’s the first appearance for the Badgers in the Cotton Bowl, which dates back to 1937.

The game will mark Wisconsin’s seventh matchup this season with a team ranked among the top 12 of the Associated Press poll. END_OF_DOCUMENT_TOKEN_TO_BE_REPLACED